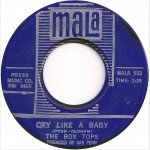 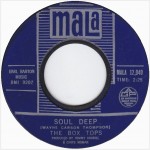 Today’s jukebox classic was written by legendary songwriters Spooner Oldham and Dan Penn who also wrote such soul classics as “I’m Your Puppet” (for James & Bobby Purify), “A Woman Left Lonely” (for Janis Joplin)  and “It Tears Me Up” (for Percy Sledge). The song was recorded by The Box Tops, the purveyors of blue-eyed soul that took the pop charts by storm in 1967 with their debut single “The Letter.” The group’s lead singer, Alex Chilton was only 16 years old when he joined the group.

The Box Tops formed as The Devilles in Memphis, Tennessee in 1963. By 1967, the lineup included Alex Chilton on lead vocals and guitar, Gary Talley on guitar, Bill Cunningham on bass, Danny Smythe on drums and John Evans on keyboards. The following year, Smythe and Evans left the band because they were unhappy with Penn’s penchant for using studio musicians on their records instead of the band. They went back to school in order to avoid the draft and were replaced by Rick Allen (of The Gentrys) on bass and Thomas Bogg on drums.

The A-side of today’s single, “Cry Like A Baby,” climbed to the #2 slot on the pop charts in 1968. It was kept out of the top slot by Bobby Goldsboro’s “Honey.”

Dan Penn was producing The Box Tops and looking for a follow-up to their debut chart-topping hit “The Letter.” He called his friend Spooner Oldham up to help him write a song. The two got together and holed themselves up in a recording studio and worked all night, but alas, nothing came to them suitable for a follow up single.

After working all night to no avail, the two went across the street to a diner for breakfast. Oldham: “I remember I was putting my head on the table. There was nobody in there, I don’t think, but us and the cook. And I tiredly put my head on the table, my arms under my head, just for a few seconds. Then I lifted my head up and looked at Dan, and because I felt sorry that he needed another record and we were no help to each other that evening, I said, ‘Dan, I could just cry like a baby.’ And he says, ‘What did you say?’ And I said it again.” (Songfacts)

Penn: “I said ‘That’s it!’ I’m sure my eyes must’ve flashed. I said, ‘To hell with the food. Here’s some money—just keep it.’ By the time we got halfway across the street, I was already singin’, ‘When I think about the good love you gave me, I cry like a baby.’ And then the key was in the lock to open the studio back up, and I said, ‘Spooner, you run to the organ, piano or whatever you wanna play; I’ll get the lights on and the gear runnin’ again. So I got the lights on and he was crankin’ up the little organ. I had the mike open, I got one of the machines going, I put on a reel of tape, went out into the studio and we wrote it before that reel of tape was done. After we did that, it was just like we’d had eight hours of sleep. Alex was supposed to be there the next morning at 10 o’clock, so my back was against the wall, and it was just like it dropped out of the sky. They came in, I gave it to Alex, everybody loved it and we cut it in a few takes. So there’s nothin’ like right now. When you try your best, I think the Lord just gives you somethin’, you know?” (http://www.conqueroo.com/danpennandspooneroldhambio.html)

The song was recorded at American Studios in Memphis and features an electric sitar played by Reggie Young and Spooner Oldham plays keyboards on the track. It’s been covered by the likes of Cher, Betty Wright, Lulu and Kim Carnes.

The group’s final top 40 hit (and the flip of today’s single), “Soul Deep” was written by Wayne Carson Thompson who co-wrote Willie Nelson’s “Always On My Mind” and also wrote “The Letter and “Neon Rainbow” for The Box Tops. The song was the group’s final US Top 40 hit during the summer of 1969, peaking at #18 on the Hot 100. By 1970, the final original members Chilton and Talley left the band, however their record label kept releasing singles through 1971. The group did not own their name, so recordings followed under The Box Tops name through 1974 featuring studio groups with no original members of the band.

Chilton went on to form Big Star, one of the most influential power pop groups in music history with very little commercial success. After the demise of Big Star, he embarked on a solo career that saw the release of many quirky and inconsistently charming releases. The Box Tops reunited several times during the late 1980s and 1990s (as did Big Star) for tours and performances. They released the album Tear Off! In 1998.