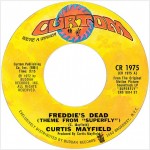 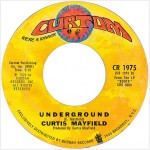 They called them “Blaxploitation” films. They were films that were created specifically for the African American urban market during the early 1970s. They weren’t known for their story lines or for the greatest acting, but they were chock full of action, and they were soundtracked by some of the greatest soul artists of all time.

No list of great Blaxploitation soundtracks would be complete without Across 112th Street by Bobby Womack, Shaft by Isaac Hayes and Trouble Man by Marvin Gaye. And then there were dozens of “second tier” films and soundtracks that were not as well known, but had their musical moments of potency including Black Caesar by James Brown, Sweet Sweetback’s Baadass Song by Melvin Van Peeples, The Mack by Willie Hutch and Together Brothers by Barry White. Perhaps the finest Blaxploitation soundtrack of them all is Super Fly by Curtis Mayfield, where not coincidentally, today jukebox classic comes from.

Super Fly was directed by Gordon Parks, Jr. and starred Ron O’Neal as an African cocaine dealer. It is one of the few Blaxploitation films where the soundtrack out grossed its parent film. The soundtrack was released in 1972 on Curtis Mayfield’s own Curtom record label and spawned two million-selling singles, including the title track which climbed to #8 on the pop charts and #5 on the soul charts, and today’s jukebox classic “Freddie’s Dead,” which placed at #4 on the pop charts and #2 on the black singles charts in 1972 before the release of the film. Additionally, the soundtrack also included the song “Pusherman” which also garnered significant airplay and would not be out of place on any Curtis Mayfield greatest hits collection.

Like Marvin Gaye’s colossal What’s Goin’ On from the same period, the album featured socially conscious lyrics that reflected the reality of inner city life which were an anomaly for the times. When it was released, record company brass at Buddah (which distributed Curtom Records) didn’t believe the record would sell, however the album ultimately topped the pop charts for four weeks and the black charts for six weeks.

Interestingly, the song was only featured in the film as an instrumental which kind of makes sense since the song’s stance is decidedly anti-drug use, while the film centers on the doings of a bad-ass drug dealer. As a result, it was not eligible for an Academy Award nomination because the lyrics were not heard in the film. The song was nominated for a Grammy for Best Rhythm & Blues Song, but lost out to The Temptations’ “Papa Was A Rollin’ Stone.”

Personnel on the single included Curtis Mayfield on vocals and guitar, Joseph Lucky Scott on bass, Master Henry Gibson on percussion, Morris Jennings on drums and Craig McMullen on guitar. It has been covered by Fishbone, MFSB, The Derek Trucks Band and E.U.

The flip of today’s single features an atmospheric spoken intro that morphs into a scuzzy lowdown, sinister vibe with a spiraling guitar figure. It’s a sound that only Mayfield could pull together with his otherworldly falsetto. It was culled from his previous album, Roots which was released in 1971.