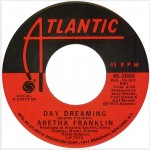 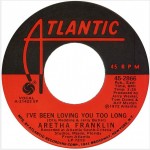 Today’s jukebox classic is a self-penned nugget from Aretha Franklin’s classic Young, Gifted and Black album. The song features some of the most lilting and sensuous vocals Reethy ever captured on record. The album was Aretha’s most consistent platter and it captured her at her absolute prime in a year that saw the release of classic soul albums like Stevie Wonder’s Talking Book, Curtis Mayfield’s Super Fly, Al Green’s I’m So In Love With You and Let’s Stay Together,  Bill Withers’ Still Bill and Cymande’s self-titled debut.  Amongst its tune stack are the hit singles “Rock Steady” and “Oh Me Oh My (I’m A Fool For You Baby),” along with today’s song “Day Dreaming.” The album won Aretha her sixth Grammy Award for Best R&B Performance by a Female Artist in 1973.

“Day Dreaming” was released in 1972 and climbed to #5 on the pop charts, while topping the Hot Soul Singles charts for two weeks and selling over a million copies. The track features Donny Hathaway on electric piano, jazz great Hubert Laws on flute, Chuck Rainey and Cornell Dupree on guitar and Bernard Purdie on drums. It was produced by the Atlantic Records supreme team of Jerry Wexler, Arif Mardin and Tom Dowd and it has been covered by the likes of Mary J. Blige, Natalie Cole, Will Downing, Corinne Bailey Rae and many others.

The subject of Aretha’s day dreaming was said to be Temptations singer Dennis Edwards, however Franklin has never disclosed who the man of her day dreams really was. Franklin: “’Day Dreaming’ was rather personal and I was thinking about someone who used to be a friend of mine. I’ll give you a hint. Used to be with one of the hottest groups in the country, tall, dark and fine. ‘OOOOwww wooo wooo wheee!” – he could sing!” (Aretha Franklin: The Queen Of Soul by Mark Bego)

The song was released during the height of the singer songwriter era casting Aretha Franklin in a new light as one of the most influential female singer songwriters of the day, along with Roberta Flack, Carole King and Carly Simon who composed and performed their own material.

The flip of today’s single is Aretha’s take on the Otis Redding classic “I’ve Been Loving You Too Long” which originally appeared on his Otis Blue album in 1965. The song was written by Otis Redding and Jerry Butler, who also recorded his own version. Aretha’s cover was also included on Young, Gifted and Black. The song has been covered by a myriad of artists including The Rolling Stones, Percy Sledge, Ike and Tina Turner, Etta James, The Tindersticks, Joe Cocker and Seal.