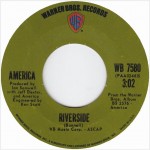 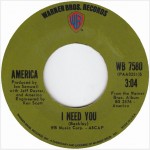 Like most of my contemporaries, the first time I heard the group America it was from their chart-topping single “A Horse With No Name” as it came pouring out of the AM radio. And like most people, I thought the single was the latest release from Neil Young.

Here’s what the song’s composer, Dewey Bunnell had to say about it: “I know that virtually everyone, on first hearing, assumed it was Neil. I never fully shied away from the fact that I was inspired by him. I think it’s in the structure of the song as much as in the tone of his voice. It did hurt a little, because we got some pretty bad backlash. I’ve always attributed it more to people protecting their own heroes more than attacking me.” (“Wikipedia”) Adding insult to injury, “A Horse With No Name” replaced Neil Young’s “Heart Of Gold” at the top spot on the charts as well in 1972.

The song was America’s calling card and it introduced fans around the world to their acoustic three part harmony sound. But the song wasn’t even on their debut album when it was initially released in Europe. After the album came out and didn’t sell well, the group reconvened in the home studio of Arthur Brown (of “Fire” fame) and began to work on a Dewey Bunnell song that had been kicking around since he was 19 years old called “Desert Song” which ultimately morphed into “A Horse With No Name.”

America consisted of Dewey Bunnell and Gerry Beckley on guitar and Dan Peek on bass, and contrary to what you may think, the group didn’t form in America at all. Each member of the group came from a military family and they met each other and formed the group in London where they all lived and attended London Central Elementary High School. Their debut album wasn’t recorded in America either; it was recorded at Trident Studios in London. For their debut album, the group was augmented by the likes of Ray Cooper on percussion and David Lindley on electric guitar. The album topped the charts and spawned two hit singles; the aforementioned “A Horse With No Name” and “I Need You” which climbed to the #9 position on the charts.

But it was the album’s opening track (and flip of today’s jukebox single) that was the real stunner on the record. With its lengthy jovial fireside acoustic guitar intro and plush three-part CSN-inspired harmonies, the song set the stage for the sound that America would take to the top of the charts over and over again during the first four years of the group’s existence. The Dewey Bunnell-penned song wasn’t the A-side of the single it appeared on, but it’s the reason I purchased it for the jukebox. “Riverside” was released as the flip side of the group’s second single “I Need You.”

“I Need You” was composed by Gerry Beckley and while it was one of the big hit singles from their debut album, it’s not one of the album’s best tracks with its trite lyrics (“I need you / like the flowers needs the rain…”) and ultra-repetitious chorus. That said, the group can be forgiven since the album does include great songs like “Three Roses,” “Sandman” and the plush “Here,” making it their very best release.

America would go on to team up with producer George Martin and score numerous hits including “Ventura Highway,” “Tin Man,” “Lonely People,” “Sister Golden Hair” and “Daisy Jane” before the hits began to dry up. Peek left the group in 1977 to become a contemporary Christian recording artist leaving the remaining members to carry on as a duo. He died in July of 2011 of a heart disease, and the group continues to tour as a duo to this day.