You are here: Home / Music / Experimental / Song Of The Day by Eric Berman – “Voice Poetry” by Ornette Coleman 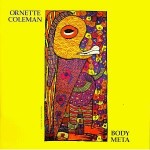 Back in 1978, Ornette Coleman formed Prime Time, his first double trio, and began releasing records on his own Texas-based label, Artist House Records.

Today’s Song Of The Day by Eric Berman comes from the first release on the label called Body Meta which was recorded in 1976. Prime Time featured Jamaaladeen Tacuma on bass, Charles Ellerbee and Bern Nix on guitars, and Ronald Shannon Jackson and his son Denardo Coleman on drums.

While by no means top 40 music, the record was one of Coleman’s easier to listen to records providing a good entry point for those into discovering more about him and his Harmolodic sound. The short-lived Artists House label also released terrific and challenging records by James “Blood” Ulmer and Waymon Reed.