You are here: Home / Music / Big Band / Song of the Day – “Savoy Truffle” by Ella Fitzgerald 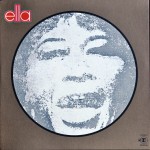 A few days ago, I featured Fats Domino’s recording of “Lady Madonna” from the 1969 album Fats Is Back. That record was produced by Richard Perry for Reprise Records, and today’s Song of the Day by Eric Berman follows Perry to the very next project he worked on, Ella by Ella Fitzgerald.

Reprise records of the late ‘60s was an artist’s haven due in no small part to the approach label head Mo Ostin took towards nurturing his roster. As a result, the label attracted top-shelf folk and rock attractions like Neil Young, Frank Zappa, Joni Mitchell, Jimi Hendrix, Fleetwood Mac, Ry Cooder and Arlo Guthrie.

But let’s face it, Reprise was once Frank Sinatra’s label and it always had a sweet spot for its easy listening releases. Under Sinatra’s leadership, the Reprise roster featured records mostly by him and cronies like Dean Martin, Sammy Davis, Jr., Bing Crosby, Rosemary Clooney and Jo Stafford. When Sinatra sold the label in 1963 to Warner Bros., the label came under the direction of Mo Ostin.

One of the label’s early strategies was to find worthy artists who had fallen out of the spotlight, and match them up with a sympathetic producer who could give their recordings a contemporary sheen. For Ella Fitzgerald’s Reprise debut, Ostin matched her up with producer Richard Perry.

Perry booked time at Olympic Studios in London and had Ella record no less than three tunes by Smokey Robinson, including a sumptuous take on “Ooh Baby Baby,” The Temptations’ “Get Ready” and a sultry and soulful version of “The Hunter Gets Captured by the Game.” And under Perry’s direction in choosing repertoire, she also turned in more than credible versions of songs by Randy Newman (“Yellow Man” and “I Wonder Why”), Bacharach and David (“I’ll Never Fall In Love Again”), STAX men Steve Cropper and Eddie Floyd (“Knock On Wood”) and Harry Nilsson (“Open Your Window”).

However, no late ‘60s career resuscitation could be complete without a couple of Beatle tunes thrown in for good measure, and on this album Ella sings “Got To Get You Into My Life” which had been covered by numerous artists, and George Harrison’s “Savoy Truffle,” which was covered by almost no one, making Ella’s version such a treat. Although Ella sang well throughout the album, no hits ensued and the album quickly went out of print.

For her second and last album for Reprise, Things Ain’t What They Used To Be (And You Better Believe It), Ella teamed up with the late, great arranger Gerald Wilson and producer Norman Granz to record a record with far more traditional jazz arrangements, while still offering some outstanding cover choices like “Sunny,” “Mas Que Nada,” “I Heard It Through The Grapevine,” “A Man And A Woman” and “Days Of Wine And Roses.”