You are here: Home / Music / Classic Rock / Song of the Day – “Not So Sweet Martha Lorraine” by Country Joe & the Fish 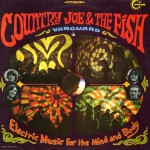 Today’s Song of the Day by Eric Berman is a splash of orange sunshine from the 1967 debut album by Country Joe & the Fish called Electric Music for the Mind and Body.

Country Joe McDonald, Barry “The Fish” Melton and company were already well established on their San Francisco home turf releasing several albums before their landmark appearance at Woodstock put them on the map. While many thought the band’s name was goofy, it actually carried political overtones for those in the know.

“Country Joe” was a nickname for Joseph Stalin in the 1940s while “the fish” is a reference to Mao Tse Tung’s famous statement that a true revolutionary must “swim among the people as fish.” For a time, the band considered going under the name “Country Mao & The Fish.”

While many consider the band to be just a footnote to the psychedelic era, their influence and their records still hold up today. I put this album by ol’ Country Joe & the Fish right up there with the best from Grateful Dead and Jefferson Airplane.