You are here: Home / Music / British Invasion / Song Of The Day – “Five Years” by David Bowie 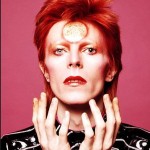 I never get tired of this guy and he’s been a favorite of mine since the early 1970s…and look how friggin’ young he is in this clip!

Today’s Song of the Day by Eric Berman features a clip of David Bowie from 1972 appearing on the British music TV show The Old Grey Whistle Test performing the opening song from Ziggy Stardust.

Let’s hope with his latest bout of activity: last year’s The Next Day album, this year’s forthcoming three-disc greatest hits collection Nothing Has Changed including the newly released seven and a half minute single “Sue (Or In A Season Of Crime)?” that will be released as a limited 10” vinyl single or download on the next Record Store Day (http://consequenceofsound.net/2014/10/david-bowie-releases-new-single-sue-or-in-a-season-of-crime-listen/), and talk of a now-completed new album, that there might be a tour in the offering in the not too distant future.