You are here: Home / Music / Bossa Nova / Song Of The Day – “Apeman” by The Esso Steel Band 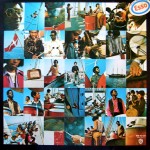 My parents married in 1953 and chose Bermuda as the destination of their honeymoon. Like many folks of their era, they came back with souvenirs from their dream vacation. In my parents’ case, they returned with the pregnancy of my older sister, and a souvenir LP by The Esso Steel Band.

The Esso Steel Band began in 1942 as The Tripoli Steel Band which was named for the “Marine’s Hymn” (“On the shores of Tripoli”), and beginning in 1951 the group was led by Hugh Borde.

The steel pan as an instrument rose out of the poorest sections of Trinidad where discarded oil barrels were fashioned into musical instruments, affording the natives an artistic outlet. Once the sound caught on, it became central to the annual Carnival celebration where musicians competed for supremacy on the instruments.

By 1967, the group was 27 strong and toured the world on Esso’s dime playing at Montreal’s Expo World’s Fair. After Esso dropped sponsorship of the group, they toured for several years as part of Liberace’s show and recorded a Grammy-winning album called Liberace Presents the Trinidad Tripoli Steel Band.

In 1971, Van Dyke Parks rediscovered them and took them into the studio to record an album for Warner Bros. Records including covers of then-current pop songs including Simon & Garfunkel’s “Cecilia,” The Jackson Five’s “I Want You Back” and today’s Song Of The Day, The Kinks’ “Apeman.”

The group splintered in 1976 after Borde relocated his family to the United States, however a new version of the group was organized by Borde’s son Emile, recording the album Momentum in 1985. The group performed well into the 2000s.

Most recently, Parks had the group re-record the song “Aquarium” from the 1971 Warner album for his latest release Songs Cycled.