You are here: Home / Music / Alternative / Song Of The Day – “African Reggae” by Nina Hagen Band 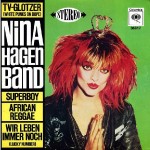 Hagen grew up in German and came from an artistic family. Her stepfather was Wolf Biermann, a radical folk singer and songwriter who influenced her individuality as a performer. Whe formed her first band, Automobil, in the 1970s and they quickly became one of the country’s premier rock bands. After leaving Germany, she settled in England and fell in with fellow punk rockers The Slits and The Sex Pistols. Upon returning to Germany in the late ‘70s, she formed the Nina Hagen Band and released her first album which featured a cover of The Tubes’ “White Punks On Dope.” Always the provocateur, she created quite a stir when she appeared on a European talk show and simulated masturbation during her interview, forcing the talk show host to step down in the incident’s wake. Hagen’s first U.S. record was a 10” EP released in 1980 featuring tracks from her first two European albums, including a cover of Lene Lovich’s “Lucky Number,” the aforementioned Tubes cover, her own “Superboy” and this amazing reggae track. She continues to record and release records mostly under the radar in this country, but her look and her sound proved profoundly influential during the early days of the Punk movement.