You are here: Home / Music / Classic Rock / Song Of The Day by Eric Berman – “Ghetto Defendant” by The Clash 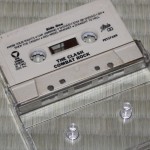 It’s hard to believe that it’s been 30 years since The Clash released their last great record “Combat Rock,” and while the record was considered pretty cutting edge upon its release, parts of it haven’t aged well at all. Sure there’s the cheap ‘80s production which can be annoying (but is probably due for some kind of hipster revival in the near future), but tracks like “Overpowered By Funk,” “Death Is A Star” and “Red Angel Dragnet” don’t seem fully realized (and never really did) and sound somewhat clunky today. That said, there is a clutch of classics to be found here: the requisite hits “Rock The Casbah” and “Should I Stay Or Should I Go” that still sound good today, and classic album cuts like “Straight To Hell,” “Car Jamming” and this track. I happened to see The Clash perform five times back in the day, but perhaps the most memorable of the performances was when they played the Pier in New York City in 1982 and were joined by Allen Ginsburg to reprise his role on this song.