You are here: Home / Music / Alternative / Song Of The Day – “Leon” by Madness 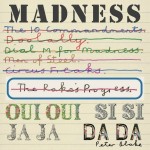 I love it when a favorite band releases an album that I had no idea was coming out. Such was the case last week when I found that Madness had a new disc called “Oui Oui Si Si Ja Ja Da Da.” This, of course poses some problems for Madness because If a long-time fan of the band doesn’t know that a new record is on the horizon, something is terribly wrong with their promotion machine…especially since I bought the vinyl copy of their last album directly from their website. I can’t tell you how much I’ve loved this band over the years, and they’ve gotten better over time evolving from lovable Ska-Punk caricatures into even more lovable art pop Gods. If there was ever a band to inherit the Kinks crown, it is Madness with their music hall melodies and lyrics that focus on the nuances of life. Madness’ last album, the cinematic “Liberty Of Norton Folgate,” (released in 2009) was one of their best yet, easily making it into the top five of the British album charts. No such luck in America, where the band has gone largely forgotten since the dominance of their hit “Our House” in 1983. So now comes a new album, not as cohesive as the last one, but still chock full of keepers, especially this one featuring our beloved Suggs (Graham McPherson) on vocals. The cover of the new album, showing crossed out alternate titles the band was considering for the record, was designed by Peter Blake who is best known for designing The Beatles’ “Sgt. Pepper’s Lonely Hearts Club Band.” It has already gone top-ten in England.