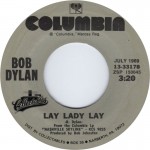 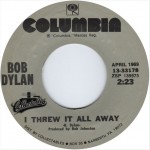 The late 1960s introduced a new Bob Dylan to the world. With his motorcycle accident and requisite seclusion in Woodstock behind him, he emerged with John Wesley Harding, a rootsy, back-to-basics album in 1968 that flew in the face of the flamboyant psychedelic music that was currently all the rage at the time.

However, nothing could prepare Dylan fans for what followed in 1969: A content Dylan who was seemingly happy with his lot in life, complete with a new soulful, melodic croon of a voice that replaced the nasal monotone of the past.  Most crucially, the 1969 Dylan model marked another shift in musical direction away from the mainstream, with an album of country influenced tunes called Nashville Skyline that was quite simply, unlike anything else he had recorded up to that point.

The album was recorded with a who’s who of Nashville’s finest session musicians including Norman Blake on guitar and dobro, Kenny Buttrey on drums, Fred Carter, Jr. on guitar, Charlie Daniels on bass, Pete Drake on pedal steel guitar, Charlie McCoy on guitar and harmonica, Bob Wilson on piano and organ and several others including Johnny Cash who provided duet vocals on “Girl From The North Country.”

“Lay Lady Lay,” the A-side of today’s jukebox classic was originally intended for the soundtrack of the movie Midnight Cowboy, but it was submitted too late to make the film and Nilsson’s cover of Fred Neil’s “Everybody’s Talking” was used in its place. Dylan then offered the song to the Everly Brothers backstage at a concert. When Dylan played “Lay Lady Lay” for them, they thought he was singing “lay across my big breasts, babe” instead of “lay across my big brass bed” and didn’t’ think that the song was appropriate for them to record. When they finally heard the correct lyrics in Dylan’s recording, they realized what a mistake they had made. They finally got around to recording the song for their EB 84 album in 1984.

“Lay Lady Lay” became one of Dylan’s biggest singles climbing all the way to #7 on the Billboard pop charts. According to Johnny Cash, Dylan introduced the song in a song circle of writers who congregated at Cash’s house that included Shel Silverstein who played “A Boy Named Sue,” Joni Mitchell who broke out “The Circle Game,” Graham Nash who performed “Marrakesh Express” and Kris Kristofferson who played “Me And Bobby McGee.”

The flip of today’s single was the first single release from Nashville Skyline, although it only charted at #85 on the Billboard pop charts. After writing the song, Dylan shared it with George Harrison who brought it to The Beatles’ Let It Be recording sessions. Session tapes reveal that George took the song out for a spin during The Beatles’ session and performed it solo. The song has also been covered by Cher, Elvis Costello, Graham Parker, Lambchop and Yo La Tengo.

Looking for classic Dylan recordings on YouTube is somewhat of a lost cause, so today’s audio clips feature Cher’s version of “Lay Lady Lay” under the title “Lay Baby Lay” recorded for her 1969 album 3614 Jackson Highway, and George Harrison’s bootleg take of “I Threw It All Away” from The Beatles’ Let It Be sessions in January of 1970.