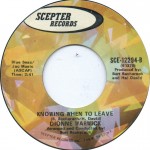 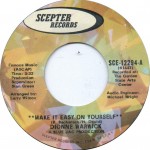 The great thing about having a jukebox is that you get to decide what the A-side of the single will be by the way you place the single into its slot. Case in point is today’s jukebox classic. I bought the single specifically for the track “Knowing When To Leave” which is technically the B-side. The real A-side is a live version of “Make It Easy On Yourself,” but not in my jukebox.

“Walk On By,” “Anyone Who Had A Heart,” “You’ll Never Get To Heaven (If You Break My Heart),” “Message To Michael,” “Alfie,” “”Do You Know The Way To San Jose,” “I Say A Little Prayer” — the list goes on and on, making an argument for the notion that the songwriting partnership of Burt Bacharach and Hal David was one of the most important in the history of pop music on par with Lennon and McCartney. Add the sophisticated stylings of Dionne Warwick into the mix and you got recordings that resulted in pure pop perfection.

It was a marriage made in heaven, but soon after this recording, the marriage would dissolve into lawsuits and acrimony.

But for now, things were good. Bacharach and David were coming off of their 1968 hit Broadway musical Promises, Promises which was based on Neil Simon’s film The Apartment. The musical ran for 1,281 performances and featured several hit songs (all recorded by Warwick) including the title hit, “I’ll Never Fall In Love Again,” “Wanting Things” and today’s Song Of The Day, “Knowing When To Leave.”

After recording her 1968 album, also titled Promises, Promises, with Bacharach and David, Warwick went to Memphis where she recorded an album of soul covers called Soulful with Chips Moman. So the time was ripe for Warwick to return to her winning partnership with Bacharach and David, which they did for the 1970 album, I’ll Never Fall In Love Again.

The reunion of Warwick with Bacharach and David resulted in their last great album together, it would also be one of the last albums Warwick would record for Scepter Records where she spent the entirety of her career up to that point.  The album featured a clutch of some of the writing team’s greatest songs including “Loneliness Remembers What Happiness Forgets,” “The Wine Is Young,” “Paper Mache,” “I’ll Never Fall In Love Again” and today’s Song Of The Day. Added to the album’s tune stack was Warwick’s own version of “Raindrops Keep Fallin’ On My Head,” plus covers of George Harrison’s “Something,” Jimmy Webb’s “Didn’t We” and Paul Anka’s “My Way.”

The album’s title song was originally a last minute addition to the musical Promises, Promises. “’I’ll Never Fall In Love Again’ was written quicker than any song that I ever wrote with Hal. I had just gotten out of the hospital. I’d been on the road and gotten pneumonia. We were on the road with Promises, Promises and we’d try to get this song written and into the show the next night or two nights later. That’s where Hal’s line came from, ‘what do you do when you kiss a girl, you get enough germs to catch pneumonia, after you do she’ll never phone ya.’ So having been in the hospital for five days with pneumonia, I got out and struggled to write that song feeling not too great.” – Burt Bacharach (from Record Collector magazine)

After the release of this album, Warwick signed a lucrative contract with Warner Bros. Records. Her new contract specified that subsequent recording would be made with Burt Bacharach and Hal David’s involvement. Their first album for the label, titled Dionne was a minor hit, only landing at #57 on the album charts.

At the time, Bacharach and David had just wrapped their first film musical Lost Horizon which when released was a colossal flop resulting in the bitter dissolution of the two writers’ songwriting partnership. This left Warwick in a precarious position with Warner Bros. facing the prospect of a breach of contract law suit. As a result, she was forced to sue Burt Bacharach and Hal David for breach of contract, ending their partnership as well.

It would be many years before Warwick would work again with Burt Bacharach and Hal David.

The true A-side to today’s jukebox classic is Dionne Warwick’s live recording of “Make It Easy On Yourself.” The Bacharach-David song was originally a hit for Jerry Butler in 1962. The song made it into the pop top twenty and reached #18 on the R&B charts. Butler originally heard the song from a demo featuring Warwick’s vocal. Warwick was under the impression that the song would be her debut single, but Scepter Records honcho Florence Greenberg rejected that idea and gave the song to Butler.

A very disappointed Warwick balked at Bacharach and David’s assurance that they would give her a song to record every bit as good as “Make It Easy On Yourself” by telling them “Don’t make me over, man.” Bacharach took her rebuke and wrote the song “Don’t Make Me Over” which ultimately became Warwick’s debut single. Warwick’s demo recording of “Make It Easy On Yourself” became an album track on her 1963 debut album called Presenting Dionne Warwick.

Warwick would later return to the song with a live single version in 1970 recorded at the Garden State Arts Center in Holmdel, New Jersey. The concert version of the song peaked at #2 on the easy listening charts while climbing to #37 on the pop charts.

The Walker Brothers topped the UK charts with their version of the song in 1965, although it only climbed to #16 on the U.S. pop charts. The song was also covered by The Carpenters (as part of a Bacharach medley), Johnny Mathis, Cilla Black, Tony Bennett, Glen Campbell, The Four Seasons, Sarah Vaughan, Long John Baldry and Rick Astley.