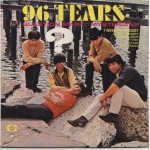 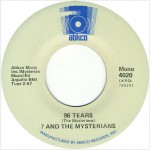 Who are ? Mark and the Mysterians…that is the question.

? And The Mysterians formed in 1962 and was the first Latino Band to score a major hit record in the U.S. with today’s jukebox classic. They were purveyors of rough and raunchy garage rock from Bay City, Michigan, and their signature chart-topping “96 Tears” was released in 1966 selling over one million copies. The song was recorded in the living room of a house in Saginaw Michigan.

The original band consisted of Robert Balderama on guitar, his cousin Larry Borjas on bass, Robert Martinez on drums and his brother Rudy Martinez on vocals. Rudy Martinez went under the name “? Mark,” so as to remain anonymous and the rest of the group took their name from a Japanese sci-fi film called The Mysterians. Further adding to the intrigue, the band always wore dark shades.

As they were getting ready to record their first record, Robert Martinez was drafted and Borjas enlisted along with him. As a result, the band added Eddie Serrato on drums and Frank Lugo on bass. Crucially, they also recruited a fourteen year old piano player named Frank Rodriguez. It was this lineup that recorded their signature hit “96 Tears,” which was written by Rudy Martinez who supplied the sturdy Vox Continental organ riff that drives the song.

The song had its genesis from a poem Martinez wrote fourteen years earlier called “Too Many Teardrops.” It was originally intended to be the flip side of their debut single, however Rodriguez insisted that the track be the A-side. The single became a regional hit on the Pa-Go-Go record label and was later picked up for national distribution by Cameo-Parkway Records.

The song has been covered numerous times including a version by Garland Jeffries from his 1980 album Escape Artist that received significant FM radio airplay. It was also covered by David Byrne, The Cramps, Eddie and the Hot Rods, Aretha Franklin, Big Maybell, Thelma Houston, The Modern Lovers, Iggy Pop, the Music Explosion, the Residents, The Stranglers, Suicide, Tom Tom Club and Todd Rundgren’s Utopia.

Can’t Get Enough Of You Baby,” the flip of today’s jukebox single shares the exact same organ introduction as “96 Tears.” The song was released as a single in 1967 where it peaked at #56 on the Billboard Singles Chart. It has been covered by Frankie Valli And The Four Season, The Colourfield and Smash Mouth who brought the song to the #14 position of the singles charts in 1998.

The group splintered in the 1970s and the original lineup reformed with Robert Martinez replacing Serrato on drums, due to his condition suffering from multiple sclerosis. A concert was recorded in Dallas, Texas in 1984 and was released by the ROIR records as The Dallas Re-Union Tapes.

The group’s original Cameo-Parkway albums came under the ownership of uber-manager Allen Klein (The Beatles, The Rolling Stones, The Animals) who let them go out of print and kept them off the market for many years, thinking they would become more valuable to him in the future. As a result, a different lineup of the group re-recorded the 96 Tears album for the Collectables record label in 1997.

After playing shows as part of Cave Stomp, a festival of reformed garage rock bands produced by New York promoter Jon Weiss, they released another live album.  The band recorded their final album of new material called More Action in 1999 before acrimoniously parting ways with Weiss over dissatisfaction with the record.

The band still performs from time to time and has been featured on Steve Van Zandt’s influential radio show Underground Garage.