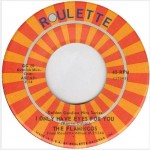 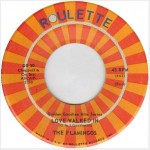 You’d be hard pressed to find a sweeter, more sumptuous doo wop classic than today’s Grammy Hall Of Fame recording by The Flamingos, a group that Billboard called “one of the finest and most influential vocal groups in pop music history.”

Cousins Jake and Ezekial Carey grew up in Baltimore hailing from the same neighborhood as Sonny Til of The Orioles. They relocated to Chicago where they formed The Flamingos in 1953. After numerous personnel changes and stints recording for record labels like Chance, Parrot, Checker (a Chess subsidiary where they scored their first big hit “I’ll Be Home”) and Decca, they signed to George Goldner’s End Records in 1958.

At the time, the group consisted of Nate Nelson, Jake Carey, Paul Wilson, Tommy Hunt and Terry “Buzzy” Johnson.  Goldner’s modus operandi was to steer the group away from recording original material in favor of recording standards, which is how they came to record today’s dreamy jukebox classic “I Only Have Eyes For You.”

The song was written by Harry Warren and Al Dubin for the 1934 film Dames. It became a hit by Ben Selvin reaching the #2 position on the charts in 1934 and The Flamingos recorded it in 1958 sending it up to the #11 position on the pop charts and #5 R&B in 1959. The recording comes from a long line of records whose production enhancements (like the reverb on the background vocals) are equally as important as the performance, in creating a perfectly plush celestial atmosphere.

The song was from The Flamingos’ 1959 album Flamingo Serenade that also featured their one-of-a-kind takes on such standards as “As Time Goes By,” “Where Or When,” “I’m In the Mood For Love,” “But Not For Me,” “Love Walked In” (the flip of today’s single), “Begin the Beguine,” “Music, Maestro, Please!,” “Time Was” and “Goodnight Sweetheart.”  While “I Only Have Eyes For You” was by far their biggest hit, their other hits included “Mio Amore,” the Doc Pomus song “Your Other Love,” “Nobody Loves Me Like You” (written by Sam Cooke) and “I Was Such A Fool.”

By 1960, Hunt left for a solo career on Scepter Records and Nate and Terry split to form The Modern Flamingos in 1961 who recorded an album for Atco Records who forced them to change their name to The Starglows. The Flamingos were inducted into the Rock and Roll Hall Of Fame in 2001 and Tommy Hunt, Terry Johnson and Johnny Carter performed together at the ceremony. Terry Johnson owns The Flamingos name and still tours today, recently releasing The Diamond Anniversary Tour CD in 2013 featuring the current lineup of Terry Johnson, Starling Newsome, Stan Prinston and Theresa Trigg.