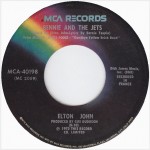 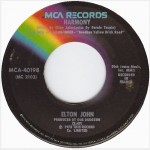 To think that today’s jukebox classic which was a #1 hit here in the United States, wasn’t even considered for a single release at all in the UK. That says something about the ultra-high quality of the songs on Elton John’s seventh album Goodbye Yellow Brick Road.  Elton John had little faith in the song as a single and was against its release. John: “I fought tooth and nail against ‘Bennie’ coming out as a single,” (The Making Of Goodbye Yellow Brick Road Eagle Vision DVD) and he was shocked when the record topped the US charts.

The song was released as a single only after it began to receive airplay in Ontario, Canada and Detroit where it topped the local radio charts. Once it was released, it also topped the national charts and sold almost three million copies. The song also peaked at #15 on the Billboard Soul Singles chart paving the way for John’s appearance on Soul Train in 1975 where he performed the song and “Philadelphia Freedom.”

While “Bennie And The Jets” sounds like a live concert recording, it is actually a studio track. Producer Gus Dudgeon suggested they give it a live concert ambience by mixing reverb and applause from some of Elton’s concerts into the mix of the track. He also used some audience sounds from Jimi Hendrix’s Isle Of Wight concert as well.

In interviews, Bernie Taupin has said that the song was written as a parody of the music industry, and the character of Bennie was a futuristic space age female rocker. Taupin: “‘Bennie And The Jets’ was almost Orwellian – it was supposed to be futuristic. They were supposed to be a prototypical female rock ‘n’ roll band out of science fiction.” (Esquire Magazine) John saw the song as paying homage to the current glam rock scene, and as time went on, he began to dress in more outrageous stage outfits and began to take on the character of Bennie on stage.

It was also Elton’s idea to add the stutter on the word Bennie, which is one of the song’s major calling cards. Taupin: “That’s a little quirk of the song which I’m sad to say I had nothing to do with. That and that wonderful big chord at the beginning, I think those two things are what probably made that song so popular. Neither of which I had anything to do with.”

The song has been covered by rapper Biz Markie and The Beastie Boys, and it was sampled by Mary J. Blige on her track “Deep Inside” (which Elton plays piano on).

By the 1973 release of Goodbye Yellow Brick Road, Elton John’s career was so white-hot he could do no wrong. His previous album Don’t Shoot Me I’m Only The Piano Player (released in 1972) topped the charts in 1973 and sold millions of copies.  Goodbye Yellow Brick Road followed suit by selling more than 31 million copies and staying at the top of the album charts for two months. Working titles for the album included Vodka and Tonics and Silent Movies, Taking Pictures.

While releasing a double album was not their initial intention, John and Taupin were so prolific during this period that they’d worked up more than enough quality material for a single album. The album captures Elton John at his commercial apex and at the height of his creative powers. The fact that it contained several of his most indelible singles, “Saturday Night’s Alright For Fighting,” “Bennie And The Jets,” “Goodbye Yellow Brick Road” and “Candle In The Wind,” was just the icing on the cake.

But it’s the lesser known gems here that really steal the show – “This Song Has No Title,” “I’ve Seen That Movie To,” “Grey Seal” (which had been kicking around since 1970), “All The Girls Love Alice” and the flip side of today’s single “Harmony” – they are indeed some of the best songs John has ever written and recorded.

All of the album’s lyrics were written by Taupin in two weeks, while John composed the music over a three day period at The Pink Flamingo Hotel in Kingston, Jamaica. John wanted to record the album in Jamaica because The Rolling Stones had just completed Goats Head Soup in the same studio. But problems with the sound system and complications from the Joe Frazier/George Forman boxing match taking place in the city forced the band to move to France.

John’s fantastic touring group, consisting of Davey Johnstone on guitar, Dee Murray on bass, Nigel Olsson on drums and Ray Cooper on percussion, settled in at Château d’Hérouville in France where the two previous Elton John albums were recorded. Sessions took place over a two week period with the band was augmented by Kiki Dee on background vocals and Del Newman providing the orchestral arrangements.

The flip of today’s single is Goodbye Yellow Brick Road’s final track. “Harmony” was originally considered to be released as the fourth single from the album, but by the time they were ready to release it, John’s next album Caribou was ready to hit the racks. The song ultimately received plenty of airplay anyway and charted regionally. It’s a great track and the perfect closer to Elton’s magnum opus album. When it was finally released as a single in Britain in 1980, it failed to chart.

Superstardom continued for Elton and company for a few more years until the inevitable decline brought on by hard living. But fear not for Elton, he ultimately weathered the dry patch that lasted almost ten years (and to be fair, did include a few hits), cleaned up his hard-partying act and recovered nicely by writing songs for Disney films, most notably The Lion King.

His latest album The Diving Board was released several months ago  to mostly positive reviews, and he is currently on the road touring in support of the release.