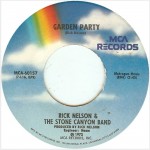 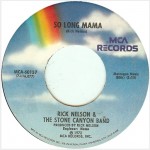 There are only a few artists that have more than one record in my jukebox, and today’s song is the second record by Rick Nelson. Previously, The Jukebox Series #30 focused on a double slab of rockabilly by way of Ricky Nelson’s “Stood Up”/”Waitin’ In School” single from the late 1950s when he was at the pinnacle of his popularity recording for Imperial Records.  Today’s jukebox classic looks at “Garden Party,” Nelson’s last big hit single from the early 1970s.

In 1963, Nelson signed a long-term deal with Decca Records. Although his Decca era produced some solidly great albums and singles, his standing on the charts was dismal. As the 1960s came to a close, you pretty much could not give a Rick Nelson record away and things got so bad that Nelson began performing shows on the oldies circuit at county fairs.

By 1972, Nelson had released 15 albums for Decca Records, each one with increasingly diminished sales. Without the radio and TV exposure that Nelson had benefitted from in the past, he was deeply entrenched in a commercial slump that it seemed at the time he would never recover from.

Nelson had formed a sturdy country rock outfit to back him called The Stone Canyon Band that included Nelson on guitar and vocals, Allen Kemp on guitar, Tom Brumley on steel guitar, Stephen A. Love on bass and Patrick Shanahan on drums. The band focused on playing original country rock material that was very much in step with the times, but played against the sensibility of his older fan base who wanted to see their hero only play his hits of the past. His sets usually consisted of mostly originals with a few oldies thrown in for good measure. Even so, oldies like “Hello Mary Lou” were totally reworked as country songs.

In October of 1971, Nelson performed on a rock and roll oldies bill with Chuck Berry, Bo Diddley and Bobby Rydell at Madison Square Garden in New York City. Nelson appeared on stage wearing bell-bottomed pants and a purple velvet shirt with hair down to his shoulders. The band launched into a set that featured mostly new material which was roundly met with boos from the audience. Disgusted by the response his new material received by the audience, Nelson went home, licked his wounds and wrote today’s jukebox classic “Garden Party.”

The song’s lyrics summed up the entire experience thusly: “But it’s all right now, I’ve learned my lesson well. You see, you can’t please everyone, so you’ve got to please yourself.”

There were many veiled references throughout the song about the people who attended the concert, the songs Nelson performed on stage, and the other artists on the bill. One lyric speaks about Yoko bringing her walrus (which was John Lennon) and another, “Mr. Hughes hid in Dylan’s shoes, wearing his disguise” referred to another Beatle.  The Mr. Hughes in the song was not Howard Hughes, but Nelson’s good friend George Harrison who was also his next door neighbor. Harrison used the “Hughes” alias when he traveled. The Dylan’s shoes line is a reference to an album of Dylan covers Harrison was planning to record which never materialized.

The line “I said hello to Mary Lou, she belongs to me” is a reference to two songs that Nelson preformed that night, his own hit “Hello Mary Lou” and a cover of Bob Dylan’s “She Belongs To Me,” and the line “I sang a song about a Honky-Tonk” refers to Nelson’s cover of The Rolling Stones’ “Country Honk” he also performed.  The last line of the song, “But if memories were all I sang, I’d rather drive a truck,” is a reference to Elvis Presley and the job he had before he became a star.

When released as a single, “Garden Party” became Nelson’s first top ten hit since “For You” in 1963, climbing to #6 on the Billboard Singles charts and topping the Adult Contemporary list. The song has been covered by Johnny Lee, John Fogerty and Phish.

The flip of today’s single is a somewhat nondescript country romp written by Nelson from the Garden Party album that features some great picking in the intro. Nelson died in a plane crash on New Year’s Eve in 1985. He was inducted to the Rock and Roll Hall Of Fame in 1987.