You are here: Home / Music / Alternative / Song Of The Day by Eric Berman – “True Thrush” by Dan Deacon 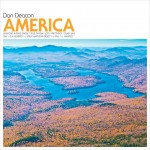 Somewhere between the robotic synchronicity of Philip Glass and the electro-crunch of LCD Soundsystem that threatens to dance yerself clean, lies the sound of Dan Deacon’s latest record “America.” Some categorize it as electronica…others contemporary classical…I just listen and marvel at one of the truly original artists making music today. Case in point is this track that seemingly takes its melody from the theme to “Magilla Gorilla” and swathes it in blissed out dance-otica. Such are the tangents that bounce off each other like positive and negative musical ions making this record so interesting to experience. Deacon studied composition at SUNY Purchase in upstate New York and then moved to Maryland where he formed a music collective of forward thinking musicians and composers. From there, he self-released several experimental records that didn’t gain any notoriety until his 2007 release, “Spiderman Of The Rings,” which got noticed by Pitchfork Media. Several records have followed, as well as performances where Deacon sets himself up right in the middle of the audience and allows audience members to gather around him and participate in his musical happenings. “America” came out this year on the Domino record label to critical acclaim.