You are here: Home / Music / Big Band / Song Of The Day – “Dance At The Gym” from the Original Soundtrack of “West Side Story” – Leonard Bernstein & Stephen Sondheim 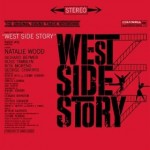 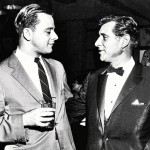 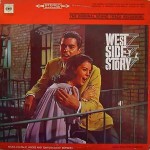 Broadway musicals don’t get any better than this!

You can keep your Andrew Lloyd Webber with his one song per musical, Leonard Bernstein and Stephen Sondheim were the real deal! And their musical, West Side Story, has never been bettered.

West Side Story was one of the first musicals where dance played as important a role in story development as dialog. The choreography was expertly done by Jerome Robbins, who also choreographed the Broadway stage version. Robbins was fired from the production before it wrapped due to it going over budget.

The film starred Natalie Wood, Richard Beymer, Russ Tamblyn, Rita Moreno and George Chakiris, and was directed by Robert Wise. As was common for film musicals, Natalie Wood didn’t sing any of her parts, and her vocals were dubbed in my Marni Nixon. The same goes for Russ Tamblyn, whose voice was dubbed by Tucker Smith.

The Original Soundtrack recording was one of the biggest selling albums of the 1960s, spending 54 well-deserved weeks at the top of the Billboard charts. The performances on the Soundtrack are far superior to those from the Original Broadway Cast recording.

The musical was set in New York City of the late 1950s and was loosely based on Shakespeare’s Romeo And Juliet, except the lead characters, Tony and Maria, were of American and Puerto Rican descent respectively. In its original incarnation, the story focused on a Jewish and Catholic couple and had the working title of East Side Story. (Another working title for the musical was Kids With Matches.)

When original work began for the Broadway production of West Side Story, Stephen Sondheim was a complete unknown, while Bernstein was a renowned conductor and composer who had written several other musicals (On The Town and Wonderful Town ), operas (including Candide which also ran on Broadway), ballets (Fancy Free),film scores (On The Town and On The Waterfront), plus a fair share of choral music, symphonic music, and piano music.

Today’s Song Of The Day is “Dance At The Gym” features several sections: a blues, promenade, mambo, pas de deux and jump. This gorgeous piece of music is breathtaking in its scope, and works on every level: as ballet, as orchestral work and as jazz.  The piece has such power, that stripped of its visuals from the movie, it stands on its own as a modern Jazz classic. Never before and never again would we ever get music this expertly crafted for the Broadway stage.