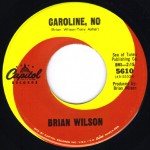 Today’s record inhabits position C1/D1 in the juke and it’s the only single attributed to Brian Wilson during his reign within the Beach Boys. The single was the first release from the group’s masterpiece Pet Sounds, although it was released in advance of the album. It really was a Brian Wilson solo record, as none of the Beach Boys appear on it. Rather, the musicians were members of the famous Wrecking Crew, a West Coast studio collective that played on hundreds of hit records during the 1960s featuring Hal Blaine on drums, Frank Capp on vibraphone, Carol Kaye on electric bass, Glen Campbell on guitar, Barney Kessel on guitar, Lyle Ritz on ukulele, Al De Lory on harpsichord, Bill Green on flute, Jim Horn on flute, Plas Johnson on flute, Jay Migliori on flute and Steve Douglas on tenor sax.

The song was written by Wilson and Tony Asher and while it only reached #32 on the charts, the meager chart position shouldn’t fool you into thinking that this is a minor recording. It is a major artistic achievement in every way possible!  The original title for the song was “Caroline I Know,” however Brian misheard the title as “Caroline No” and both he and Asher decided that the title was more in keeping with the ennui of online casinos australia the song’s lyrics.

Many people believe the song is about Brian’s wife of the time, Marilyn Rovell, however the song was a composite of an ex-girlfriend of Asher’s who cut her hair and moved to New York, and Carol Mountain, an unrequited high school crush of Brian’s.

The drum heard at the beginning of the song was actually a large upside down empty water bottle that was lying around the studio. On the Pet Sounds album, the track ends with the sounds of trains which were pulled from the studio’s sound effects library meshed with the barking of Wilson’s dogs Banana and Louie. The sounds do not appear during the fade on the single release. It is also alleged that Murray Wilson (Brian’s father) took the master tape of the song before it was submitted to Capitol and sped it up in an effort to make Brian sound younger on the record. Nevertheless, to this day the sped up version is the one that is used on the album.

The single’s flip is a gorgeous instrumental that originally appeared on the Beach Boys’ 1965 album Summer Days (And Summer Nights). It is another Brian Wilson solo recording with none of the Beach Boys present in the studio. The song features many of the same Wrecking Crew members listed above. In a little under two minutes, Wilson conjures the feeling of that first blush of romance and hope, without ever uttering a single word.