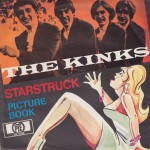 In a year that saw the release of The Beatles’ White Album and Jimi Hendrix’s Electric Ladyland, it’s no surprise that a low-key gem like The Kinks Are The Village Green Preservation Society by The Kinks would fall through the cracks. However, when one considers the high caliber and quality of the album, it is surprising that it took so long for it to take its place amongst the greatest albums of the 1960s, easily equaling, it not surpassing the two aforementioned albums.

Part of the explanation for the record being ignored is that it was totally out of step with what was going on musically during the late 1960s.  While bands were letting their freak flags fly with psychedelia, The Kinks dropped a laid-back nostalgic look at England on an unsuspecting public. Perhaps the record was also a little too British for American ears, but the fact is that The Kinks hadn’t had a proper hit on the U.S. charts since “Sunny Afternoon” hit the top twenty in 1966, and the band’s decision not to tour in support of the album upon its release didn’t help matters either.

The last album by the original quartet of Ray and Dave Davies, Pete Quaife and Mick Avory also had a tough birthing process which saw an early 12-track version pulled at the last minute by Ray Davies because he wasn’t satisfied with its quality. The band’s label then balked at Davies’ request to turn it into a double album, finally settling on the 15-track masterpiece we know today.

Today’s Song Of The Day inhabits position G1/H1 in the jukebox and comes from a German single on the Pye record label. I purchased the single on EBay about ten years ago and it was quite pricey for a 45rpm record, but considering the greatness of both songs, it was well worth the price of admission to be able to have these tracks cycle through on the juke.

The single was released in many territories around the world including the U.S., and failed to chart in all of them. The A-Side of the single is “Starstruck” which is a tuneful cautionary tale about the foibles of living the nightlife, something Ray Davies was probably no stranger to at the time. While I’ve always loved the song, it’s the B-side that got me to seek out a copy of the single for the juke.

“Picture Book” was one of a trilogy of songs about nostalgia for photographs that Ray Davies wrote around this time. The other two were “People Take Pictures Of Each Other” which ended up on the Village Green album, and “Pictures In The Sand” which wasn’t released until 1973 on The Great Lost Kinks Album compilation.

The song finally gained wide exposure in 2004 when it was used in an award-winning Hewlett-Packard ad campaign for digital photography. After all those years as an album cut that was only familiar to die-hard Kinks fans, the song finally got heard. Ray Davies: “I always knew that song would have its day…sometimes you just know. It was never a hit, but it’s become a hit in another way.”