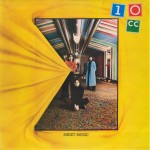 The premise of a super group is that all of the members are well known entities unto themselves. Everyone knew who Crosby, Stills, Nash and Young were, and what bands they played with before they united. The group members behind today’s Song Of The Day were also a super group, however they were behind-the-scenes super stars that few people knew before they joined forces.

The group’s story revolves around a recording studio named Strawberry Studios (after The Beatles’ “Strawberry Fields Forever”). Stewart became a partner in the studio and worked with Gouldman, Godley and Crème recording Bubblegum tunes for producers Jerry Kasenetz and Jeff Katz of Super K Productions.

The quartet were eventually signed to UK Records (after being rejected by Apple) by label head Jonathan King, who dubbed the group 10cc, named after the average amount ejaculated by men. (Jonathan King was well known for his own hit single, “Everyone’s Gone To The Moon,” and for signing Genesis to Decca Records.)

Their second album was called Sheet Music and is their best and most consistent recording, featuring the hit singles, “Wall Street Shuffle” and “Silly Love.” The record covered all bases from the sublime of “Wall Street Shuffle,” “Old Wild Men” and “Silly Love” to the ridiculous of “The Sacro-Iliac,” “Clockwork Creep” and today’s Song Of The Day, all filtered through a Beatle-esque sheen.

Elsewhere, “Somewhere In Hollywood” is a multi-part suite that points in the direction the band would take with “Une Nuit A Paris,” the opening track from their breakthrough album, The Original Soundtrack. Rounding out the album are two of the groups most wigged out tunes: “Baron Samedi” and “Oh Effendi.”

After Sheet Music, the group signed with Mercury Records and released The Original Soundtrack in 1975 which included their worldwide smash hit “I’m Not In Love.” They followed the release with How Dare You! in 1976, which included the hit “Art For Art’s Sake.”

Godley and Creme left the fold in 1976 to promote an early guitar synthesizer they invented called The Gizmo. They released the triple album called Consequences,  however neither the album nor The Gizmo ever took off. They persevered over the next decade by becoming video vanguards, producing hit videos for the likes of Sting, The Police, Frankie Goes To Hollywood and Duran Duran. They also scored a late ‘80s hit with their video and song, “Cry.”

Meanwhile the Stewart-Gouldman version of 10cc went on to score the hits, “The Things We Do For Love” (from the album Deceptive Bends)and “Dreadlock Holiday” (from Bloody Tourists). Stewart left the band in 1996, and today 10cc regularly tour Europe with Gouldman at the helm.