You are here: Home / Music / Alternative / Song Of The Day – “Whole Wide World” by Wreckless Eric 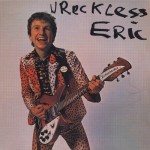 The above non-sequitors were all slogans for one of the coolest record labels to be associated with the late 1970s punk rock movement. Stiff Records established itself by not only having a roster that included Elvis Costello, Nick Lowe, The Damned, Wreckless Eric and Ian Dury, but by the hyperactive media antics they pulled off in the name of cheap publicity.

The label was formed by Dave Robinson and Jake Riviera (aka Andrew Jakeman) in 1976. Robinson managed British pub rockers Brinsley Schwartz while Riviera managed Dr. Feelgood. Their first release was the Nick Lowe single “So It Goes” b/w “Heart Of The City” which sold well and got the label off to a great start. While success ensued with subsequent recordings by the above named artists, so did acrimony between Robinson and Riviera. By 1978, Riviera left to form Radar Records taking Elvis Costello, Nick Lowe and The Yachts with him.

Stiff continued on its merry way eventually signing such artists as Lene Lovich, Madness, Rachel Sweet, The Pogues, The Feelies, The Belle Stars and Yello before closing its doors for good in 1985.

Wreckless Eric (aka Eric Goulden) was one of the original artists on the Stiff roster and released his signature song “Whole Wide World” on a 1977 Stiff compilation album. It was also released as the A-side to Eric’s first single and then his eponymously titled debut album in 1978. Most of the tracks on the album were sped up making Eric’s vocals higher than they should have been. Backing Eric on the single was Nick Lowe who played most of the instruments and Steve Goulding on drums.

While the single was well-liked by critics when it was first released, it never charted. It has since grown in stature and has been covered by The Monkees (on their 1987 Pool It album), Paul Westerberg, Mental As Anything, The Lightning Seeds, The Wallflowers and The Proclaimers. The song was also performed by Will Ferrell in the 2006 film Stranger Than Fiction.

Eric released two more albums on Stiff and had a few minor hits including “Take The K.A.S.H.,” “Crying Waiting Hoping” and “Reconnez Cherie” before leaving the label in 1980. In the mid-‘80s he formed the group Captains Of Industry with Norman Watt-Roy and Mick Gallagher who were both members of Ian Dury & The Blockheads, and has released projects under the names The Len Bright Combo, Le Beat Group Electrique and The Hitsville House Band.

Eric continues to record and tour today with his singer/songwriter wife, Amy Rigby. Together, they have released three duo albums.