You are here: Home / Music / Alternative / Song Of The Day – “I’m Too Sexy” by Right Said Fred 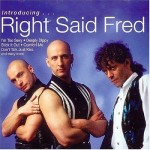 I worked at Reader’s Digest in their recorded music division for five years compiling music collections for people who were much older than I was at the time. In effect, I was selling nostalgia to folks whose memories I did not share. The job proved research intensive and ultimately rewarding, and by creating these music collections, I got a pretty good idea about what makes people feel nostalgic for music while garnering a newfound appreciation for a whole host of music I might not have ever heard otherwise.

One of my co-workers at Digest was a musicologist named Gary Theroux. Gary used to say that “Nostalgia is the past with the pain removed.”  It was a very true statement, and one I subscribed to for the rest of my days working in the music industry selling people their musical memories. For it is nostalgia that turns yesterday’s songs into tomorrow’s standards.

In all my years of making music compilations, I came to the conclusion that the songs we feel most nostalgic for today, are the songs that were most reviled by the critics when they were new, and equally loved by the everyday radio listening fan. Many of them also have some kind of novelty value as well.

I’m not talking about songs by The Beatles, Bob Dylan or even Rodgers & Hammerstein that are stone cold classics today. I’m focusing more on the fringe songs that crept into our consciousness mainly because they had some kind of novelty value. Songs like “Ice Ice Baby” by Vanilla Ice, “Macarena” by Los Del Rios, “Rock Me Amadeus” by Faclo , “Funkytown” by Lipps Inc., “Walk Like An Egyptian” by The Bangles, “Don’t Worry Be Happy” by Bobby McFerrin, “Kokomo” by The Beach Boys and today’s Song Of The Day, were all pretty much hated by critics upon their release, yet have managed to stand the test of time anyway.

They were all played to death on radio to the point where even fans of the songs never wanted to hear them again, and they all had some kind of novelty value. Many of them were co-opted by Madison Avenue for use in TV commercials in subsequent years after their run on the charts.

This brings me to a song that is ripe to become one of tomorrow’s golden classics, but only time will tell if PSY’s “Gangnam Style” will stand the test of time…

Today’s Song Of The Day, “I’m Too Sexy” is one such novelty song that has managed to stand the test of time. It’s the kind of song that was roundly panned by the music cognoscenti upon its release, but now when played on the radio or by DJs at parties, it is warmly received and remembered. The song was recorded by a British group called Right Said Fred that consisted of brothers Richard and Fred Fairbrass and Rob Manzoli.

So here’s a bit of Right Said Fred trivia for you to end today’s Song Of The Day.

Q: What does “I’m Too Sexy” have in common with David Bowie, Mick Jagger and Bob Dylan?

A: The Fairbrass brothers worked with all of the above named legends: Fred played guitar in Bob Dylan’s band in the film Hearts Of Fire, Richard appeared in David Bowie’s Jazzin’ For Blue Jean video and both took part in Mick Jagger’s home video Running Out Of Luck.