You are here: Home / Archives for Procol Harum

1967, Procol Harum, The Jimi Hendrix Experience and Denny Laine all appeared at The Saville Theatre London, England. 1967, The Monkees wins an Emmy for Outstanding Comedy Series, beating out Andy Griffith, Bewitched, Get Smart, and Hogan's Heroes. 1968, Having been arrested the month before on charges of marijuana possession, Rolling Stone Brian Jones elects for trial by … END_OF_DOCUMENT_TOKEN_TO_BE_REPLACED 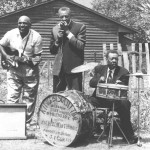 1965, Blues harmonica player, singer and songwriter, Sonny Boy Williamson died in his sleep. Van Morrison, Aerosmith, The Who, The Animals, Yardbirds, and Moody Blues all covered his songs. According to the Led Zeppelin biography Hammer of the Gods, touring the UK in the 60's, Sonny Boy set his hotel room on fire while trying to cook a rabbit in a coffee percolator. 1965, … END_OF_DOCUMENT_TOKEN_TO_BE_REPLACED