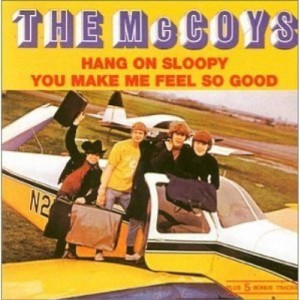 1965, The Rolling Stones’ manager Andrew Loog Oldham and his partner Tony Calder launched Immediate records. Their first release was The McCoy’s “Hang On Sloopy.” Mick Jagger, Eric Clapton and Nico  all attended the launch party. The label became the home of The Small Faces, The Nice, Amen Corner and Chris Farlowe and a young producer, guitarist Jimmy Page.

1966, The Beatles, touring America for the last time, were forced to cancel and reschedule their performance in Cincinnati’s open-air stadium, Crosley Field. Heavy rain (and no cover provided) made electrocution a virtual certainty if The Beatles had attempted to perform.

1968, The University of Tennessee reported that a guinea pig subjected to days of rock music played at 120 decibels had suffered acute hearing damage.

1969, After finishing “I Want You, (She’s So Heavy,”) The Beatles worked on the running order for the Abbey Road album. A preliminary master tape was compiled, the medley was originally slated for side one of the album, and the placement of “Octopus’s Garden” and “Oh! Darling” were reversed from the final version. The album was to end with the slashed guitar chord that finishes “I Want You (She’s So Heavy”). This was the last time all four Beatles were together in Abbey Road studios.

1969, Led Zeppelin appeared at The Aerodrome in Schenectady, New York.

1971, On the second night of a North American tour, Led Zeppelin appeared at the Seattle Centre Coliseum, Seattle, Washington.

1971, Ten Years After and Procol Harum appear  at The Forum in Montreal, Quebec.

1972, The Grateful Dead play at the Civic Auditorium in San Jose, California.

1972, David Bowie performed at the Rainbow Theatre in London.

1980, During a North American tour, Queen appeared at the Civic Centre, Hartford, Connecticut.

1980, John Lennon began recording his final album, ‘Double Fantasy’. It would be released on November 17th by the newly-formed Geffen Records and would win the 1982 Grammy Award for Album of the Year.

1983, Madness, Joan Jett, The Police and R.E.M. all appeared at JFK Stadium in Philadelphia.

1986, Rick Allen drummer with Def Leppard made his first live appearance with the band after losing an arm in a car accident, when they appeared at the Monsters Of Rock Festival, Castle Donington, England.

1988, Steve Winwood went to No.1 on the US album chart with his fifth solo album Roll With It. The title cut also topped the US singles charts.

2006, The Rolling Stones played the first of two nights at Twickenham Stadium on their A Bigger Bang world tour. Feeder and The Charlatans also appeared.

More from Today in Rock History