You are here: Home / Music / Classic Rock / Song of the Day – The Pointer Sisters: “Yes We Can Can” 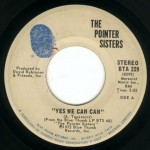 This Allen Toussaint-penned gem comes from the Pointer’s self-titled debut album from 1973. It’s infectious…it’s funky…it’s contagious…it’s been often sampled, but never improved upon!

The Pointer Sisters were indeed real sisters. They began as a duo performing under the moniker “Pointers, A Pair” in 1969 featuring sisters June and Bonnie. Anita joined in 1970 and they became in-demand background vocalists, singing for the likes of Grace Slick, Sylvester, Boz Scaggs and Elvin Bishop. While backing Bishop in 1971, they were signed by Atlantic Records where they released several singles that went nowhere. Sister Ruth joined in 1972 when they signed with Blue Thumb Records.

On Blue Thumb, their goal was to meld their jazz and vocalese style of singing with the sounds of be-bop and funk in order to create something new and unique. They topped this all off by dressing in 1940s clothing making them stand out amongst the funky threaded artists of the early 1970s. One of the first songs they recorded for the album was Allen Toussaint’s “Yes We Can Can” which came to them via producer David Rubinson.

The song established the sisters as a recording act reaching #11 on the pop charts and #12 on R&B. Backing the Pointers on the album were Willie Fulton on guitar, Dexter Plates on bass and Gaylord Birch on drums. The album also included the top forty hit “Wang Dang Doodle,” plus the Wilton Felder composed “That’s How I Feel” and the flip of today’s single “Jada,” which was named after Anita Pointer’s daughter.

While the group found early success in the 1970s, their career really took off in the 1980s with a string of smash hits including their cover of Bruce Springsteen’s “Fire,” “He’s So Shy,” “Slow Hand,” “Automatic,” “Jump (For My Love),” “I’m So Excited,” and “Neutron Dance.”

Today’s Song Of The Day was written by Allen Toussaint and originally recorded in 1970 by Lee Dorsey under the title “Yes We Can.” Toussaint is one of New Orleans’ favorite sons, responsible for penning a jukebox full of classics that have spun gold for those who have recorded them. Songs like “Mother-In-Law” (Ernie K-Doe), “Working In The Coal Mine” (Lee Dorsey, Devo), “Fortune Teller” (Benny Spellman, Rolling Stones, The Who), “Southern Nights” (Glen Campbell), “Java” (Al Hirt), “Whipped Cream” (Herb Alpert & The Tijuana Brass), “Sneaking Sally Through The Alley” (Robert Palmer), “What Do You Want The Girl To Do” (Boz Scaggs) and today’s Song Of The Day have poured out of his pen and up the charts, and these are just the tip of his iceberg of hits.

Toussaint has also contributed his arrangement and production talents to a stellar list of albums including Paul McCartney & Wings’ Venus And Mars and its single “Listen To What The Man Said,” Labelle’s Nightbirds and its single “Lady Marmalade,” The Band albums Rock Of Ages, Cahoots and The Last Waltz, and Boz Scaggs’ Silk Degrees. Post Katrina, he recorded an essential album with Elvis Costello called The River in Reverse, a traditional New Orleans jazz album called The Bright Mississippi and an exceptional live album.