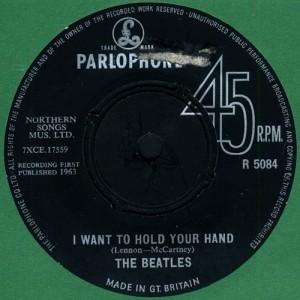 1963, James Carroll at WWDC in Washington, DC, became the first disc jockey to broadcast a Beatles record on American radio. Carroll played “I Want To Hold Your Hand,” which he had obtained from his stewardess girlfriend, who brought the single back from the UK. Due to listener demand, the song was played daily, every hour. Since it hadn’t been released yet in the States, Capitol Records initially considered court action, but instead released the single earlier than planned.

1967, John Lennon and George Harrison hold a party in London for the area secretaries of the Official Beatles Fan Club. The guests are treated to sneak previews of the films Magical Mystery Tour and The Beatles at Shea Stadium.

1968, “The Who’s Christmas Party” takes place at the Marquee in London. It is The Who’s last ever performance at the venue where they had first come to the capital’s attention during their residence in 1964-1965. This time, Who fan Nigel Cornthwaite comes onstage to sing “Magic Bus” with the Who. Yes is the opening act.

1968, Pink Floyd release “Point Me At the Sky” in England. It’s their fourth 45, and their last single release in the UK for 11 years.

1971, John Lennon and Yoko Ono appear at Harlem’s Apollo Theater for  a benefit for the families of victims of the Attica State Prison riots.

1971, David Bowie released his fourth album Hunky Dory, which was the first to feature all the members of the band that would become known the following year as Ziggy Stardust’s Spiders From Mars. 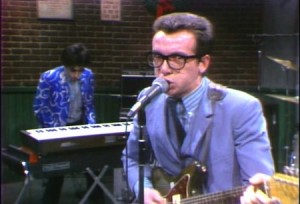 1977, Filling in for The Sex Pistols on NBC- TVs “Saturday Night Live”, Elvis Costello stops his performance of “Less Than Zero,” saying ” there’s no reason to do this”, and launches into “Radio Radio” which he’d been told not to perform. Costello said later that the inspiration for the last-minute song change came from a similar episode years earlier, concerning Jimi Hendrix. Hendrix was on the BBC television show hosted by pop-star Lulu, and was supposed to play his hit, “Hey Joe.” Hendrix started the song, stopped, said, “We’d like to stop playing this rubbish and dedicate a song to the Cream regardless of what kind of group they might be. I’d like to dedicate this to Eric Clapton, Ginger Baker, and Jack Bruce,” and then launched into a feedback-laden version of “Sunshine of Your Love.”

1977, George Harrison played an unannounced live set for the regulars at his local pub in Henley-On-Thames near his home in the UK.

1979, The Who appeared at the Capital Centre, Landover, Maryland.

1982, Karen Carpenter made her last live appearance with The Carpenters when she performed in Sherman, California. Carpenter suffered from anorexia nervosa, the eating disorder which was a little-known illness at the time. She died at the age of 32 from heart failure, on February 4, 1983 caused by complications related to her illness.

1994, A remixed version of  “December, 1963 (Oh, What A Night)” by The Four Seasons re-entered the US Hot 100, where it stayed for another 27 weeks, just as it did when it first charted in 1976. The combined run will establish a record for the longest total chart appearance in US chart history.

1995, A statue of the late Frank Zappa was unveiled in Vilnius, the capital of the Republic Of Lithuania. It had been organised by Zappa fan club President Saulius Pauksty.

1999, American jazz-funk, soul-jazz saxophonist Grover Washington, Jr. died of a heart attack aged 56. He collapsed in the green room after taping four songs fo. The Early Show, at CBS Studios in New York City, He released over 20 solo albums and featured on the 1981 Bill Withers hit “Just The Two of Us.”