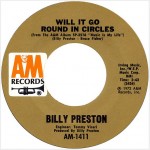 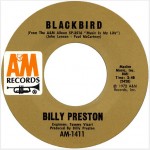 He truly was the fifth Beatle…he was also a Rolling Stone, and Billy Preston also did numerous sessions with a stellar cast of characters that included Ray Charles, Sam Cooke, The Beach Boys, Red Hot Chili Peppers, Little Richard, Sly & The Family Stone, Peter Frampton, Joe Cocker, Eric Clapton, Johnny Cash, Neil Diamond and dozens of others. He also co-wrote Joe Cocker’s smash hit “You Are So Beautiful” and sent his own hits like “Space Race,” “Outa-Space,” “Nothing From Nothing,” “With You I’m Born Again” (with Syreeta Wright) and today’s jukebox classic, “Will It Go Round In Circles” up the charts.

The list of albums he’s appeared on reads like a history of classic rock ‘n’ roll including The Rolling Stones’ Sticky Fingers, Exile On Main Street, Goats Head Soup, It’s Only Rock ‘n’ Roll, Love You Live, Black And Blue and Tattoo You,  The Beatles’ Let It Be and Abbey Road, George Harrison’s All Things Must Pass, The Concert For Bangla Desh, Dark Horse, Extra Texture, Thirty-Three & 1/3 and Gone Troppo, and Ringo Starr’s Ringo and Goodnight Vienna. He was, indeed the Forrest Gump of keyboards to the biggest bands in the land. And if that’s not enough, he was also the first musical guest on Saturday Night Live, he inspired Miles Davis who named a song after him on his Get Up With It album, and he also coined the phrase “If you can’t be with the one you love, love the one you’re with” for Stephen Stills.

Preston first came into The Beatles’ circle back in 1962 when he was a sixteen year old touring member of Little Richard’s band. But it wasn’t until 1969 when George Harrison walked out on the Let It Be sessions, and returned with Preston in tow in an effort to get the other three fabs to be on their best behavior during the acrimonious sessions that led to their last two albums as a group. At one point, John Lennon suggested that they add Preston as the fifth member of the band to which McCartney quipped that four Beatles were bad enough. (The Beatles – A/B Road: The Complete Get back Sessions, January 24th via Wikipedia)

“George Harrison, a friend of Preston, had quit, walked out of the studio and gone to a Ray Charles concert in London, where Preston was playing organ. Harrison brought Preston back to the studio, where his keen musicianship and gregarious personality temporarily calmed the tension.” (Harrington, Richard (June 8, 2006). “‘Fifth Beatle’ Billy Preston Made the Greats Even Greater”. Washington Post. Retrieved 2008-10-02 via Wikipedia)

Preston was signed to The Beatles’ Apple Records label where he launched his solo career in 1969 with the gospel single “That’s The Way God Planned It” and the album of the same name that were both produced by George Harrison. After a second Apple LP release went nowhere, Preston signed with A&M Records where he found his greatest solo success.

Today’s jukebox classic was one of two chart-topping singles Billy Preston recorded (“Nothing From Nothing” was the other). The song was written by Bruce Fisher, who was working in the mail room of NBC-TV and Billy Preston. Inspiration for the song came after Preston walked into the writing session and told Fisher “I got a song that ain’t got no melody.” The song was originally released on his 1972 solo album Music Is My Life that featured the musicianship of The Brothers Johnson (George Johnson on guitar and Louis Johnson on bass), and a horn section that included Tom Scott and Jim Horn. The flip of today’s single finds Preston paying tribute to his former band, with his gospel-flavored cover of the Beatles’ classic “Blackbird.”

During his later years, Preston served time in prison for tax evasion and suffered from kidney disease and high blood pressure. He died in June of 2006 after several months in a coma of malignant hypertension which caused his kidneys to shut down and respiratory failure.