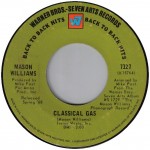 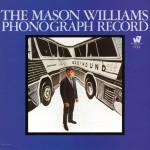 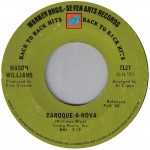 It’s from an album that starts with an Overture. No, it’s not a Broadway Cast album or film soundtrack to a musical; however, it is an album with lofty levels of conceit and pretension that could only have been recorded in the late ‘60s by Mason Williams. And for The Mason Williams Phonograph Album, it all makes sense since Williams is an artist of high conceit and pretension with a supreme talent level to match. Fortunately (for him and his fans), he was coddled by the most artist friendly record label of the 1960s, Warner Bros. Records, for otherwise, a record like The Mason Williams Phonograph Album would have never been possible.

While he is best known for today’s jukebox classic “Classical Gas,” which topped the charts in 1968, won three Grammy Awards for Best Instrumental Composition, Best Instrumental Performance, and Best Instrumental Orchestra Arrangement (for arranger, Mike Post), Mason Williams is also an Emmy-winning comedy writer, a standup comedian, an author and a poet.

During the early 1960s, Williams was a member of several folk groups including The Wayfarers and The Hootenaires who played shows at the Troubadour and many other west coast folk clubs. The Kingston Trio cut his song “More Poems” for their Nick, Bob & John album, and Glenn Yarbrough (of The Limeliters) cut several of his songs on his Honey And Wine album. It was also during the great folk era that he released several albums of instrumental banjo and six-string guitar music that paved the way for today’s Song Of The Day.

As a stand-up comedian, Williams’ format included reciting poems and telling stories in verse while accompanying himself on guitar. Some of his early stand-up can be heard on the album Them Poems which was released by Vee-Jay Records released in 1964. The record and his book The Mason Williams Reading Matter, were reissued in 1969 to capitalize on the success of “Classical Gas.”

Williams wrote comedy for The Smothers Brothers Comedy Hour and The Glen Campbell Goodtime Hour, as well as for other name brand television personalities including Andy Williams, Dinah Shore, Roger Miller and Petula Clark. With his musical background and cutting edge wit, he was the perfect choice to write for The Smothers Brothers Comedy Hour, where he introduced the Pat Paulsen For President gags that ran on the show during the 1968 election year. (Paulsen was cast on the show as an editorialist whose deadpan delivery during the faux election campaign made him famous with the counterculture.) Mason Williams won an Emmy for his writing on the show, and he also gave Steve Martin his start as a comedy writer.

Williams premiered and performed today’s jukebox classic several times on The Smothers Brothers Comedy Hour including an indelible clip of him playing it using a clear Plexiglas guitar filled with water and a few goldfish. He also created an early form of music video when he synched the song to a film by Dan MacLaughlin titled 3000 Years of Art in 3 Minutes and aired it on the show.

The hit single version of “Classical Gas” was arranged by Mike Post who would go on to greater fame for writing the themes to the TV shows Law & Order, NYPD Blue, The Rockford Files, L.A. Law, Quantum Leap, Magnum, P.I. and Hill Street Blues. Williams recorded and released “Classical Gas” several other times, including a solo guitar version on his 1970 Handmade album, and in 1987 with Mannheim Steamroller.

He was also one of the flagship counterculture artists at Warner Bros. Records during the late ‘60s and early ‘70s where he released five albums including the best-selling Mason Williams Phonograph Record, The Mason Williams Ear Show, Music, Handmade and Sharpickers.

The Mason Williams Phonograph Record also garnered acclaim for its album cover featuring a Greyhound bus. The original image is an 11′ x 37′ poster that is on permanent display at New York’s Museum of Modern Art.

The album is chock full of great ‘60s orchestral band arrangements with backup expertly supplied by members of The Wrecking Crew. There are a few throwaway “link” tracks that are only seconds long and act to bridge between songs and ideas. Along with the hit single, the album includes “One More Time” which sounds like it could have come off of a Glen Campbell album, “Sunflower” that provided the soundtrack to a film project Williams worked on of a skywriting airplane painting the sky with a huge flower. The B-side to my jukebox copy of the “Classical Gas” single is “Baroque-a-Nova” which was arranged by the album’s other arranger, Al Capp. The single is a double A-sided reissue.

“Baroque-A-Nova” is a typical late ‘60s instrumental which has a great arrangement featuring wordless vocals and harpsichord, creating a “hip” orchestral vibe.

Williams also wrote the 1968 UK chart-topper “Cinderella Rockefella” with Nancy Ames for Esther and Abi Ofarim, and in 1980, he briefly served as head writer for NBC’s Saturday Night Live, but left after clashing with producer Jean Doumanian.

Throughout the 1970s, Williams performed his Concert For Bluegrass Band And Orchestra with the Oklahoma City, Sacramento, Eugene and Denver symphonies. In 1987, Williams teamed up with Mannheim Steamroller to release a new album titled Classical Gas on the American Gramaphone label. The album featured a re-recorded version of the title track backed by Mannheim Steamroller and Fresh Aire, and sold more than a million copies. He also went on to record several other memorable albums including A Gift Of Song which was an acoustic Christmas album from 1992.

He also wrote comedy for The Smothers Brothers many TV shows and appearances throughout the ‘70s and ‘80s. Today, he still releases music and performs in front of audiences around the world.