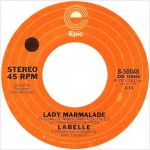 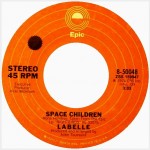 With that one line from today’s jukebox classic, American music fans were introduced to a certain creole lady of the night and also got a French lesson. At the same time, America also discovered the wonders of Patti LaBelle, Nona Hendryx and Sarah Dash, who collectively went under the moniker of Labelle.

Labelle was not a new entity in the music business. The group formed in the 1960s in Philadelphia under the name The Blue Belles with the same lineup as above, plus Cindy Birdsong (who went on become a member of Diana Ross and The Supremes). They scored several soulful doo wop flavored ballads that highlighted Patti’s huge set of pipes including “Down The Aisle (The Wedding Song),” “You’ll Never Walk Alone” and “Over The Rainbow.”

The group changed their name to Labelle after Birdsong left for The Supremes in 1967 and shared co-billing with Laura Nyro on her Gonna Take A Miracle, album which in my estimation is one of the greatest records ever recorded. (If you’ve never heard this album, stop reading and go to Spotify immediately!) By 1974, the group changed their persona and became an outlandish funk group. The group’s sexually infused personality and freaky party attire made them huge with the Gay community, and to this day, Patti LaBelle is still their main diva.

“Lady Marmalade” was written by Bob Crewe, who also wrote most of the Four Seasons’ biggest hits with Bob Gaudio, and Kenny Nolan, who along with Crewe wrote Frankie Valli’s “My Eyes Adored You” and many others. The track was produced by none other than New Orleans’ favorite son,  Allen Toussaint, who wrote numerous hits including “Working In The Coalmine,” “Yes We Can-Can,” “Fortune Teller,” “Southern Nights” and “Mother-In-Law,” to name but a few. He is also heard playing piano on the track.

Labelle was not the first group to take a crack at recording the song. It was originally recorded by Nolan’s group, Eleventh Hour in 1974. It was Toussaint who chose the song for Labelle’s chart-topping album Nightbirds. The song topped the R&B and Pop Singles charts in 1975, knocking out Crewe and Nolan’s composition, “My Eyes Adored You” by Frankie Valli from the top slot.

The song saw a resurgence in popularity in 2001 when it topped the charts again after it was recorded by Christina Aguilera, Lil’ Kim, Mýa, and Pink. That version was produced by Missy Elliott for the soundtrack to the film Moulin Rouge. It went on to win the 2001 Grammy for Best Pop Collaboration With Vocals. It is the only song to top the U.S. and UK charts twice. The song was also covered by All Saints (who topped the UK charts with it), Sheila E., the disco group Boogie Knights and Lords Of Acid.

The aforementioned hook of the song, “Voulez-vous coucher avec moi, ce soir?” which translates to “Do you want to sleep with me tonight?,” was originally spoken in  the play A Streetcar Named Desire by the character Blanche DuBois. When LaBelle performed the song on TV, they were forced to change the famous line to “Voulez-vous danser avec moi, ce soir?” which means “Do you want to dance with me tonight.”

Patti Labelle: “I swear I had no idea for a while what it meant, until I asked Bob Crewe, who recorded it, ‘what’s voulez-vous coucher avec moi ce soir?’ He told me, ‘Oh gosh’, I said, ‘what will my mother think?’” (New Musical Express via Songfacts.com)

By 1977, Labelle’s popularity began to decline and all three members went their separate ways, each scoring hits on their own. Today, Patti LaBelle is still the most visible member of the group and has rightfully held on to her title as Diva.