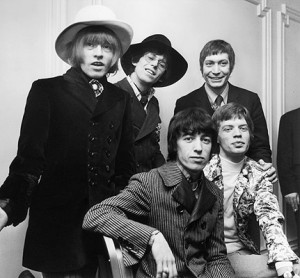 1967, Rolling Stones guitarist Brian Jones was rushed to St Georges hospital in London after collapsing. A doctor reported Jones was tired and suffering from over strain and was also recovering from having some teeth out.

1968, Deep Purple played at the Grande Ballroom in Detroit, Michigan.

1968, Marvin Gaye scored his first number one single when “I Heard It Through The Grapevine” started a five-week run at the top. It was Marvin’s 15th solo hit. The song was written by Norman Whitfield and Barrett Strong in 1966, the single was first recorded by Smokey Robinson & the Miracles, as well as Gladys Knight & the Pips.

1969, The Jackson Five made their first network television appearance when they appeared on The Ed Sullivan Show.

1971, The Grateful Dead were in Ann Arbor, Michigan where they played at Hill Auditorium.

1972, Born To Boogie,  the Ringo Starr directed movie premiered in London. The film was based around a concert at Wembley Empire Pool, London, England starring Ringo Starr, Marc Bolan and T. Rex, and was released on The Beatles’ Apple Films label.

1973, Bruce Springsteen appeared at the Pinecrest Country Club, Shelton, Connecticut. Only 200 tickets were sold for the show.

1973, Roger Daltrey of The Who performs the second of two nights as Tommy in the second all-star concert version of the orchestral Tommy at the Rainbow Theatre in London. 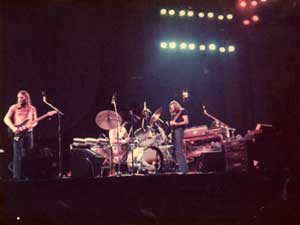 1974, Pink Floyd played the last show of the 1974 British Winter Tour at the Hippodrome in Bristol. These shows were notable for the concert debut of “You Gotta Be Crazy,” an early version of “Dogs” that would subsequently appear on the Animals album.

1980, Yoko Ono called on fans to observe ten minutes of silence in memory of John Lennon. 30,000 gathered outside St George’s Hall in Liverpool, while nearly 100,000 attend a memorial in New York’s Central Park.

1981, During their Ghost In The Machine World Tour, The Police played the first of three sold out nights at Wembley Arena, London, England.

1985, Whitney Houston scored her first UK number one single with “Saving All My Love For You.” The song, which was written by Michael Masser and Gerry Goffin, had been a minor hit for Marilyn McCoo and Billy Davis Jr. in 1978, and was also a US chart topper for Houston.

1991, Michael Jackson started a four-week run at No.1 on the US album chart with his eighth studio album Dangerous. The album has sold over 32 million copies worldwide making it one of the best selling albums of all time. Nine singles were released from the album spanning two years (1991–1993).

1999, Sir Paul McCartney appeared at The Cavern Club Liverpool, where his last gig at the venue was in 1963. The show was filmed for TV and also went out live on the Internet.

2003, Ozzy & Kelly Osbourne went to number one on the UK singles chart with “Changes,” a remake of a track first sung by Ozzy on the Black Sabbath album Volume IV in 1972. It was the first father and daughter chart topper since Frank & Nancy Sinatra in 1967.

2004, The funeral took place in Arlington, Texas for Damageplan and Pantera guitarist Dimebag Darrell, Eddie Van Halen, placed Darrell’s original black and yellow stripes guitar into the Kiss Kasket he was buried in. Several thousand fans and friends gathered at the Arlington Convention Center in Arlington, to mourn the guitarist’s death. Darrell was shot five times in the back of the head during a gig at the Alrosa Villa Club in Columbus on 8th Dec 04 by a mentally ill former US Marine. Damageplan’s drum technician, John Brooks, and tour manager, Chris Paluska, were both injured in the incident.

Link to the Today in Rock History archive