1964, The Beatles made their US live debut on CBS-TV’s The Ed Sullivan Show. They performed five songs including their current number one “I Want To Hold Your Hand,” watched by an estimated 73 million people. The show had received over 50,000 applications for the 728 seats in the TV studio.

1967, Canadian conductor Percy Faith died aged 67. He scored the 1953 hit “Song from the Moulin Rouge” and 1960 number one “Theme From A Summer Place,” nine weeks at the top of the charts, which won the Grammy Award for Record of the Year in 1961.

1967, the film for the latest Beatles single “Penny Lane” and “Strawberry Fields Forever”was shown on BBC-TV’s Top Of The Pops. It was the first Beatles single not to make number one in the UK since 1963, held off the top by Engelbert Humperdinck’s “Release Me.”

1968, Hal Cone former manager of The Monkees, and Head of Jones Records was found guilty of theft, forgery, receiving stolen property and conspiracy.

1968, Paul Revere & the Raiders performed at the Civic Center in Charleston, West Virginia.

1972, Genesis performed at the Rainbow Theatre in London. 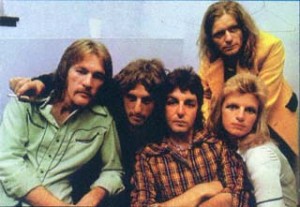 1972, Paul McCartney’s Wings played the first night of a UK College tour in Nottingham. The group arrived unannounced, asking social secretaries if they would like them to perform that evening. The band’s intended first stop on the tour, Ashby-de-la-Zouch, refused to allow them to play so they drove on to Nottingham. Admission was 40p, British pub rock band Brinsley Schwarz was the opening act for the tour.

1974, The Love Unlimited Orchestra went to number one on the singles chart with”Love’s Theme.”

1976, David Bowie performed at The Forum in Inglewood, California.

1981, American singer Bill Haley was found dead, fully clothed, on his bed at his home in Harlington, Texas from a heart attack, Haley had sold over 60 million records during his career. Scored the 1955 number one single “Rock Around The Clock,” and became known as the first rock ‘n’ roll star. Haley was blinded in his left eye as a child due to a botched operation and later adopted his distinctive spit-curl hairstyle to distract attention from his blind eye.

1982, George Harrison presented UNICEF with a check for $9.0 (£5.65) million, ten years after the fundraising concert for Bangladesh.

1990, Nirvana set out on a short west coast tour opening for Dinosaur Jr. at the Pine Street Theater, Portland, Oregon.

2009, Led Zeppelin singer Robert Plant took home five prizes for his collaboration with bluegrass singer Alison Krauss at this year’s Grammy Awards held in Los Angeles. The duo won album of the year for Raising Sand and record of the year for “Please Read The Letter.” Coldplay won song of the year for “Viva La Vida.”

Get more rock history and birthdays at Yeah Baby Tunes