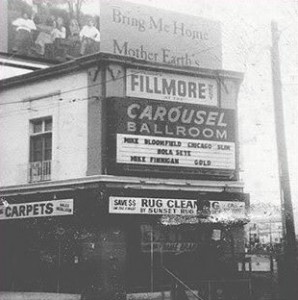 1965, The Grateful Dead and Jefferson Airplane played at the opening night of San Francisco”s Fillmore West.

1965, The Rolling Stones started a two week run at number one on the singles chart with “Get Off Of My Cloud,” the group’s second chart topper. The song knocked The Beatles “Yesterday” from the top spot.

1966, The Who play the Kongresshalle in Cologne, Germany.

1967, The Beatles mixed four songs at Abbey Road studio in London, “Hello Goodbye,” “Your Mother Should Know,” “Magical Mystery Tour,” and “I Am the Walrus.” Due to the radio feed used in “I Am the Walrus” being recorded in mono, the song changes from stereo to mono at the line “Sitting in an English garden.”

1967, During a three hour session Bob Dylan recorded “All Along The Watchtower” and “John Wesley Harding” at Columbia Recording Studios in Nashville, Tennessee.

1968, Joe Cocker was at No.1 in the singles chart with his version of The Beatles song “With A Little Help From My Friends”. The song was also a UK No.1 for Wet Wet Wet in 1988.

1968, The Monkees’ $750,000 (£468,750) feature film, Head opened in New York City. Instead of being aimed at their target audience of teeny boppers, the film contained a dark theme about the manipulation of the group with walk-on appearances by inappropriate guests and scenes of Vietnam War atrocities. Reviews were harsh and the picture was a box office disaster.

1970, Aerosmith performed their first ever gig when they played at Nipmuc Regional High School in Mendon, Massachusetts.

1971, The soundtrack to “Shaft” by Isaac Hayes went to number one on the album chart.

1971, In Melody Maker, Pete Townshend writes another defense of The Who’s higher ticket prices but apparently runs out of patience and says sarcastically that he only pretends to believe in what he says and is only doing it for the money. The Who play the Rainbow Theatre in London.

1972, Rolling Stone Bill Wyman lost his driving license and was fined £20 ($32) by Chelmsford Magistrates court after being caught speeding in his Mercedes on the A12.

1973, Michael Martin and Phil Kaufman were charged and fined $300 (£187.50) each for the theft of a coffin containing Gram Parsons body. The court heard that the two men were merely carrying out Parsons’ wishes to be cremated in the desert.

1974, David Bowie appeared at the Public Auditorium in Cleveland, Ohio during the Philly Dogs tour. After the show, Bowie stayed up all night in the hotel bar dancing and miming.

1976, The Steve Miller Band went to number one on the singles chart with “Rock ‘n’ Me,” the group’s second number one.

1982, Jennifer Warnes and Joe Cocker started a three week run at number one on the US charts with “Up Where We Belong,” a song taken from the film An Officer And A Gentleman’,

1982, Soft Cell’s ‘Tainted Love’ achieved the longest unbroken run on the UK charts when it logged its 43rd week in the Top 100.

1993, Meat Loaf started a five week run at number one on the US singles chart with “I’d Do Anything For Love (But I Won’t Do That.”) It was also a chart topper in the UK.

1993, Pearl Jam went to number one on the US album chart with Vs’ selling 950,378 copies making it the highest sales in US album history in one week.