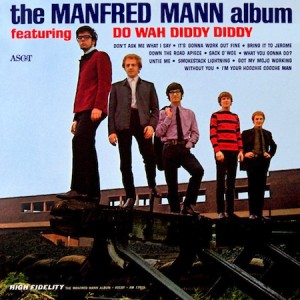 1964, Manfred Mann started a two week run at number one on the US singles chart with “Do Wah Diddy Diddy.”  It was also a chart topper in the UK. The song was first released by the US group The Exciters.

1969, Paul Kantner of Jefferson Airplane was busted for marijuana possession in Honolulu and was fined $350.

1969, The Kinks play their first concert in the US in four years, supporting Spirit at New York’s Fillmore East. The American Federation of Musicians banned the group from playing there after a disastrous 1965 tour during which the band spent as much time fighting onstage as playing music.

1970, The Jackson Five started a five-week run at number one on the US singles chart with “I’ll Be There.” The song was the group’s fourth chart topper of 1970, it made it to the fourth spot in the UK. Motown records claimed the group had sold over 10 million records during this year.

1973, The Rolling Stones performed two shows at Foret Nationale, Brussels, Belgium, as part of a tour of the UK and Europe. Opening for the tour’s shows were Billy Preston and American group Kracker, the first band to be signed to Rolling Stones Records. Bobby Keys didn’t show up for the concert, which resulted in him being banned by Mick Jagger from future Rolling Stones tours until 1989, with occasional exceptions. According to legend, Bobby missed the gig due to him filling a hotel bathtub with Dom Perignon champagne and drinking most of it.

1978, The Grateful Dead performed the first of five nights at Winterland Auditorium in San Francisco, after their triumphant return from shows at the pyramids in Egypt.

1981, Christopher Cross started a three week run at number one on the US singles chart with “Arthur’s Theme, (Best That You Can Do),” his second US chart topper, and a number seven hit in the UK.

1982, The Who appeared at Folsom Field, Boulder, Colorado.

1998, Canadian rock band, The Barenaked Ladies went to number one on the US singles chart with “One Week.”

1999, Thomas Durden died aged 79. Wrote the lyrics to “Heartbreak Hotel,” one of Elvis Presley’s early hits. Durden had read a newspaper account of a man who had committed suicide, the man had left a note saying, ”I walk a lonely street.” Durden used the phrase as the basis for the song.

2007, US singer Teresa Brewer died aged 76. She was one of the most popular American pop singers of the 1950’s scoring hits such as “Gonna Get Along Without Ya Now” and “Into Each Life Some Rain Must Fall.” She also sang with Tony Bennett, Duke Ellington, Dizzy Gillespie and Wynton Marsalis.

2008, Four Tops singer Levi Stubbs died at his Detroit home, aged 72. Stubbs had been in poor health since being diagnosed with cancer in 1995,  A stroke and other health problems led him to stop touring in 2000. The group signed with Motown Records in 1963 and produced twenty Top 40 hits over the next 10 years, making music history with other acts in Berry Gordy’s Motown stable of artists.