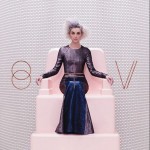 The second day of Chicago’s Pitchfork Music Festival was all about the ladies with stunning performances by St. Vincent (aka Annie Clark) whose theatrical set leaned heavily on her latest self-titled album that came out late last year and is better than any other record that I’ve heard this year. Vincent played guitar throughout while she and her band synchronized their movements to vibrant versions of “Digital Witness,” “Prince Johnny,” ”Birth In Reverse, “Bring Me Your Love” and “Rattlesnake” which opened her set.

tUnEyArDs also killed with their set today. The group, who returned to Pitchfork for a second time, is the brainchild of Merrill Garbus who plays ukulele and creates vocal and drum loops on the fly, and synthesizer/bassist Nate Brenner. This year’s version of the group jettisoned the two saxophone players they’ve toured with in the past in favor of two additional vocalists and a drummer who also sang. While the group’s latest album, Nikki Nack takes some getting used to, the songs heard tonight came off much stronger than in their studio incarnations, and the additional live vocals added another dimension to Garbus’ daisy-flavored Afro-pop.

Other highlights of the day included Ohio based indie punk rock trio Cloud Nothings who have also played the festival before, the ‘80s influenced British band Wild Beasts whose danceable sound was often reminiscent of Echo And The Bunnymen, and the psychedelic garage rock of Circulatory System featuring Will Cullen Hart of Olivia Tremor Control.

I also heard plenty of hip-hop today including sets by Kanye West’s homeboy Pusha T who made up for starting twenty minutes late with a short likable show featuring a couple of tracks from the GOOD Music compilation, and Danny Brown who for was afforded an ear-splitting 75 minute slot that began to wear out its welcome much before it actually ended. (That said, I watched the show from a distance while those who were right up close were completely enthralled.)

The night was capped off by the reunion of Neutral Milk Hotel who released two well-received albums over twenty years ago and then went on an extended hiatus. During their absence, their music began to grow in stature as the group’s influence could be heard in the recordings of a new generation of artists including groups like Bright Eyes, Bon Iver and Arcade Fire. It was great to see the adulation the band received all this adulation at this late date, although I find the somewhat whiny voice of Jeff Mangum an acquired taste…one which I never acquired the first time around.