You are here: Home / Music / Alternative / Song Of The Day – “Paradise Girls” by Deerhoof 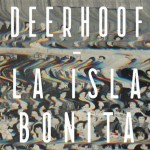 Song Of The Day by Eric Berman – “Paradise Girls” by Deerhoof

Their Breakup Songs was the album that topped my Best Albums list of 2012, and now Deerhoof return with their new album La Isla Bonita. (out Nov. 4)

Emanating from San Francisco (Greg Saunier, Ed Rodriguez & John Dieterich) by way of Japan (Satomi Matsuzaki), Deerhoof have released 13 albums over 20 years of unpredictable music with a sound that would have made Yoko Ono proud and John Lennon jump for joy.

It has finally come to pass that the dance ingredients of Yoko Ono’s recordings circa Double Fantasy coupled with the crunchy noise of her earlier albums which were championed by John Lennon have somewhat reached the mainstream with Deerhoof and their brand new album La Isla Bonita.

The album consists of rough tracks that were recorded in Rodriguez’s basement with the intent to send them to their producer before going into the studio. Upon playing the tracks back, the band realized that they already had the album they wanted to make.

Greg Saunier: “No one gave much thought to microphone placement and other technical matters, or playing the parts perfectly, or even staying in tune. It was unselfconscious, spontaneous and fun, all four musicians playing in the same tiny room at the same time.”

Satomi Matsuzaki later added her simplistic, repetitive lyrics and baby-doll vocals on top of the tracks solidifying the Deerhoof sound that fans have come to love.