You are here: Home / Music / Alternative / Song Of The Day – “Company In My Back” (Live Version from Kicking Television) by Wilco 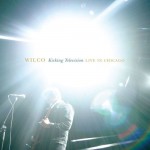 Live albums. They are the most maligned recordings by critics, yet the fans just love them. You don’t believe me? Ask Peter Frampton, The Allman Brothers, Led Zeppelin, Yes, Lynyrd Skynyrd, The Rolling Stones, David Bowie, Neil Young, Neil Diamond, Little Feat, The Who, Lou Reed, Cheap Trick and Kiss to name a few, who have made classic live albums and have benefitted from huge sales. Heck, live albums are so ingrained in our pop culture, that you can probably name each of the live albums I’m referring to above, just by the list of artists.

In the pantheon of music recordings, live albums live kind of a lowly life. For some they are seen as stop-gap product put out by artists who feel the need to keep their brand in the heads of their fans while they take the time to rejuvenate their creative juices between projects. Artists and record companies alike issue them in order to fulfill contracts. Many love live albums because they act as a souvenir and a powerful reminder of a great night out at a concert they’ve been to, or a concert they would have loved to have seen. Then there are those who love them because they provide an opportunity for us to hear a band stretch out and jam the way they never do in the studio, with warts and all. And when an artist releases a live album, they get to create their own reality, by mixing applause and audience participation wherever they want, in order to heighten the “live” experience.

Perhaps, my favorite of all live albums is “Kicking Television” by Wilco, which is why I have singled it out for today’s Song Of The Day. The album was recorded over four days at the Vic Theater in Chicago (the band’s home turf) in May of 2005, and captures the group touring behind “A Ghost Is Born”, one of their best albums. It was also the first tour and record to feature the great guitarist Nels Cline and crucial multi-instrumentalist Pat Sansone in the lineup. The addition of these two members had solidified the Wilco lineup, which remains the same to this day. The shows were also filmed for a proposed DVD, but it never came to fruition. While the record focused mainly on material from “Ghost” and “Yankee Hotel Foxtrot,” it does offer a pretty good representation of what the band was about at the time. It also features some of the walls of feedback the band uses to great effect during performances. The double disc collection features 23 tracks, while the vinyl release adds an additional eight bonus tracks over the four record set.

Another one of the greatest live albums of all time is Talking Heads’ “Stop Making Sense” which captured the expanded version of the group on tour behind the album “Speaking In Tongues.” The show was captured on film from the Pantages Theater in Hollywood by Jonathan Demme in what most critics believe to be the very best concert film of all time. Having seen the tour when it came to the Forest Hills Tennis Stadium in New York, I can attest to how great this version of the Heads was at the time.

Critics also generally agree that James Brown’s “Live At The Apollo” was one of the greatest live recordings of all time. The album was recorded at the Apollo Theater in Harlem in October of 1962, and was released by King Records the following year. Brown funded the recording himself when King records balked at the idea that a live record could make money for the company. While no live album could fully capture the power of the Godfather Of Soul in full action, this album does manage to capture a fair share of the excitement Brown was able to create on stage.

Some of my favorite live albums over the years include Lou Reed’s “Rock ‘n’ Roll Animal” from 1974 which also had a sequel from the same Academy Of Music show in the album “Lou Reed Live” the following year. David Bowie’s “David Live” is one the critics particularly hated. The 1974 double album captured from the Tower Theater in Philadelphia while on tour behind “Diamond Dogs,” was reissued on CD several years ago with the correct running order of the show restored, making it much better listening experience. Then there’s Grateful Dead’s “Europe ’72” from the band’s first European tour where they introduced many new songs into their repertoire that are now considered classics. Last year, Grateful Dead productions released all of the concerts from the tour into a mammoth 73 CD set.

There are literally thousands of live albums littering the musical landscape, but I’d be remiss if I didn’t mention the following favorites of mine including Neil Young’s “Rust Never Sleeps”/”Live Rust” albums recorded on tour in 1978, Kraftwerk’s “Minimum/Maximum” recorded in 2004 (it was also one of the best concerts I’ve ever seen for its visuals), Sam Cooke’s “Live At The Harlem Square Club 1963,” Simon & Garfunkel’s “Live In Central Park” (mainly because I was there), Roy Orbison’s “A Black And White Night” (featuring Orbison backed by an all-star band that included Elvis Costello, Tom Waits, Bruce Springsteen, Bonnie Raitt, kd lang, Jackson Browne and many others), Gram Parsons and the Fallen Angels “Live 1973” which was recorded at Ultrasonic Studios in Long Island for broadcast on WLIR FM, John Coltrane’s “Live At The Village Vanguard” from 1963, Miles Davis’ “Complete Cellar Door Recordings” from 1970, Bob Marley’s “Live” from 1976, Nirvana’s “MTV Unplugged” and Frank Zappa’s “Zappa In New York.”

OK, so I’ve covered my favorites and purposely excluded some of the classics. What are your favorite live albums and why?