You are here: Home / Music / Alternative / Song Of The Day – “Wake Me Up” by Elvis Costello & The Roots 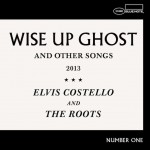 After the release of Elvis Costello’s last two T. Bone Burnett-produced albums, he was ready to throw in the towel on his recording career seeing no point in going back into the studio to create new records that nobody would hear. And as a long-time Costello fan of 36 years who suffered through those albums, I was beginning to sadly think that it might’ve been the right decision.

Fortunately, inspiration struck in the oddest of places while guesting on the Late Night With Jimmy Fallon TV show where The Roots have been the house band since the show’s inception. With a college of musical knowledge and a mutual love and thirst for all things sonic between Costello and Roots drummer, ?uestlove, a collaboration between the two seemed to be a match made in hipster heaven.

So, is this Costello’s hip hop album? Is it The Roots’ foray into punk rock?

Neither is true, but with his fedora tipped oddly to one side, Costello and The Roots have fashioned a narcotized, off-beat and off-kilter record drawing on both artists’ signature sound, while creating a groovy new sonic palate for all to taste.

Elvis: “It seemed like a good playground, a fabulous ride, to go in and play with a great band that has a broad-minded view of music. It felt like anything was possible.” ?uestlove: “We recorded a lot of it in our tiny little dressing room at 30 Rock, not a traditional studio, but Elvis had no hang-ups about that.”

In the spirit of sampling no doubt influenced by The Roots, Costello revisits his back catalog and repurposes lyrics from past songs for Wise Up Ghost’s tune stack. Once the novelty of playing spot the reference wears off, you’re still left with one of his strongest collections of songs in over a decade.

Today’s Song Of The Day (shown here from a the album’s kickoff concert in Brooklyn last week) plunders Costello’s 2004 track “Bedlam” from The Delivery Man and mingles it with the 2006 title track from his collaboration with Allen Toussaint The River In Reverse. “Stick Out Your Tongue” revisits the 1983 Imposter single “Pills And Soap” while incorporating “Hurry Down Doomsday (The Bugs Are Taking Over)” from his overlooked 1991 collection Mighty Like A Rose.

In the song “Refused To Be Saved” Elvis spits out lyrics from Mighty Like A Rose’s “Invasion Hit Parade,” as he approaches a rapper’s cadence accented by sharp horn blasts, and the stunningly beautiful urban doo wop of “Tripwire” hearkens back to the song “Satellite,” from Costello’s 1989 album Spike. One of the most beguiling tracks on the collection is “Cinco Minutos Con Vos,” a sinuous horn-infused duet with singer La Marisoul of the band La Santa Cecelia.

Elsewhere, The Roots’ influence shines through on the woozy funk of “Sugar Won’t Work” and the Princely soul of “Viceroy’s Row.” Their use of string arrangements to create a sonic tension in “Refused To Be Saved” and “Wise Up Ghost” create a symphonic funk sound reminiscent of classic Isaac Hayes.

And if to reassert his influence on the proceedings,  ?uestlove’s drums introduce many of the album’s songs including “(She Might Be A) Grenade,” “Walk Us Uptown,” and  “Viceroy’s Row,” exposing The Roots’ penchant for building songs up from the rhythm tracks first.

Costello and The Roots have created a soulful socially conscious musical bouillabaisse with Wise Up Ghost; a kind of a What’s Goin’ On and Superfly for the twenty-teens…and a record for the ages by both artists.