You are here: Home / Music / Classic Rock / Song Of The Day by Eric Berman – “Electricity (Drugs)” by Talking Heads 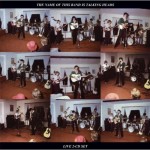 One of the musical highlights of our 16 hour car trip from The Outer Banks of North Carolina back home to Chicago was listening Talking Heads’ live double album entitled The Name Of This Band Is Talking Heads. The second half of the album features recordings from the 1980-81 Remain In Light tour when Talking Heads expanded from a quartet of David Byrne, Jerry Harrison, Tina Weymouth and Chris Franz to a 10-piece band adding Adrian Belew on guitars, Busta Cherry on bass, Bernie Worrell on keyboards, Joe Rossy on percussion and Dolette McDonald and Nona Hendryx on vocals.

By 1979, Brian Eno’s influence was felt all over the Heads’ music, especially on more atmospheric songs like today’s Song Of The Day originally from their Fear Of Music album. Eno’s input was beginning to create a chasm within the band because the rest of the group felt that he was monopolizing David Byrne’s attention. Today’s song’s title was changed from “Drugs” to “Electricity” by the time it was released on the album in 1979. Whatever tension Eno’s presence created also resulted in the band taking off in a far more interesting direction with a brand-new funkified line-up. The video portion of today’s posting shows the expanded Heads in action (particularly Belew) from a show broadcasted on TV from Rome in 1980. (Today’s Song of The Day begins at 20:00 into the 64-minute clip. Having seen this version of Talking Heads several times in concert, it is well worth watching if you have the time.)

By the time we got around to hearing the The Name of This Band Is Talking Heads album at the tail end of our trip it was as a follow-up to a most-enjoyable spin of XTC’s Black Sea. And it was just the tonic we needed to wield our way through Saturday night Chicago city traffic and back up to the northern suburbs. Home Sweet Home!